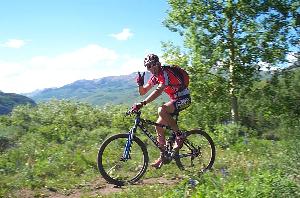 Zapata Espinoza, a graduate of UC Santa Cruz, worked for LA Weekly Magazine in the mid 1980s, writing articles on local politics. In 1985, he began working for Hi-Torque Publications, initially on its Motocross Action magazine. From 1986 to 1993, he was editor of Mountain Bike Action magazine. Under his leadership, Mountain Bike Action became the largest and most influential mountain bike publication in the industry. He then spearheaded Mountain Bike magazine, giving it an ever expanding role. Espinoza, known as Zap, is one of the most visible and colorful figures in mountain bike journalism. His passion and commitment to the sport make him outstanding in this field. Zap is a strong supporter of racing. He works to promote cycling safety, advocacy and product merchandising through his insightful journalism.