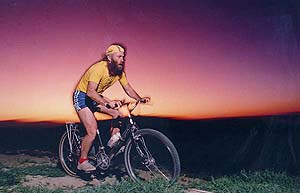 Born Michael Hiltner, at some point this racer, rider and promoter christened himself with two words for “winner,” thus the catchy handle for this mildly eccentric personality. But the moniker is far from unfounded: during the 1960s, he road-raced his way onto the Olympic team.

After venturing off-road, promoter Vincente’s races became famous, and include the spectacular Reseda to the Sea 14-miler. Even today, his tours are remembered as some of the gnarliest in Southern California.

Vincente’s “Topanga!” was one of the first production mountain bikes available, with the VVA-26 semi-custom frames available beginning in 1982. This limited edition bike was produced for many years. The engaging “Topanga Riders Bulletin” was published for years by Victor as well, and can be perused in the Mountain Bike Hall of Fame archives at the Marin Museum of Bicycling.

“I first ventured beyond “End Maintained Road” signs in 1978,” Victor wrote. His decade of mountain biking, coupled with over a decade of road riding, made him a true veteran of the sport.