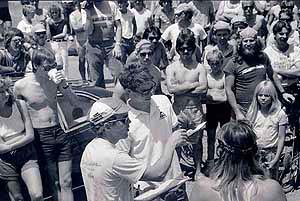 In 1961, tom discovered dirt road adventure around Sonoma County with his Schwinn clunker. A short stem, straight alloy bars and 27 gears adorned this cruiser. Not until years later in the 1970s, when the term was first mentioned to him, did Tom identify himself with “Mountain Biking.” But since that time he has become a major, though low-key, figure in many aspects of the sport.

As founding member and first President of NORBA, Tom has seen the need for expertise during racing events as it evolved. He started Specialized technical support, now a big part of that corporations’ contribution, and to this day takes it upon himself to provide Specialized tech support for over 50 races a year. Riders know him as a familiar face during the Rockhopper series, and through him research and development at Specialized receives the riders’ input.

Formerly a racer, Hillard “wrote a book” on racing, that is, the NORBA rule book. The USCF, current governing body in charge of NORBA rules, continues to call upon his experience as changes and additions are made annually. Hillard’s “firsts” include trials promotion. Several shows a year find Hillard choreographing this cutting-edge competition.

Making himself available to race directors and event promoters all over the country, Tom’s sharing of his experience saves people from having to learn innumerable details firs-hand. “My current job allows me to help promoters to put on a better race, “Hillard says.

“He’s invaluable to racing in America,” one director says. “Racing definitely wouldn’t be the same without the support of Hillard and Specialized.”

As the sport radiates to other parts of the world, Hillard will likely be there, in some capacity. “I’m starting to be in demand for overseas races,” he comments, indicating that other countries also appreciate and recognize the value of his expertise.