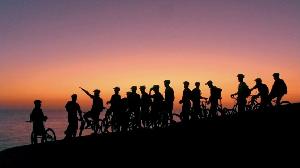 Photos in the link above are from the first RADS Challenge in 1984 with Billy Bedford, Dave Wonderly, and Carl Iverson. Also included are early photos of Hans Rey, the set of Fire Ice & Dynamite, and other historical photos.

I began mountain biking in the spring of 1988. I have been riding the local trails of Laguna Beach, where I live, for over two decades. When I first began riding, I heard rumors of an almost mythical group of accomplished riders called the Laguna Rads. As my dedication to mountain biking grew, I became more entrenched in the mountain bike culture of Laguna Beach. I became friends with several members of the Rads. I have been fortunate enough to go on rides with them, as well as attend many of their events, parties, and mountain bike trips. As I gained awareness of the unique nature of this bicycle club, I began to wonder how mountain biking history would remember the Rads. Now, over twenty years later, I am writing a nomination for the mountain bike hall of fame. I believe the MTBHOF is the appropriate place for history to acknowledge and remember the Laguna Rads. My name is Garret Andersen, and although I am not a member of the Laguna Rads, I am an avid cyclist and advocate of the sport of mountain biking.

Pi-o-neer (verb) \pi-o-nir\
2A: a person or group that originates or helps open up a new line of thought or activity or a new method of technical development

No cycling group or club fits this definition more aptly than the Laguna Rads. The Laguna Rads, based in Laguna Beach, Southern California, were instrumental in introducing the freeride movement, which is arguably the most exciting form of the sport today. They have organized and held two of the longest continually running races in mountain biking history. The Rads have taken the adventure and camaraderie of mountain biking to a new level, while preserving the original spirit of the sport.

The Rads could be considered the forefathers of the freeride movement. They did not know they were inventing or helping to shape a new type of mountain biking when they formed in 1983. The nature of the terrain in their hometown dictated that. The hills in Laguna Beach are extremely steep and demanding. Most of the trails require expert mountain biking skills. Many of the climbs can only be ascended with a mix of granny-gear pedaling and the inevitable hike-a-bike portage. The downhills must be ridden with the saddle all the way down to allow the rider to keep his center of gravity as far back as possible. Simply put… freeriding was born.

“The Rads had a huge influence on my personal career – they made me a mountain biker and injected the spirit of our sport into my veins. In my opinion, the Rads are the pioneers of freeride and they have kept the original spirit from the early days of mountain biking alive to this day. Although many Rads used to compete on international as well as local levels, unlike our sport in the 90s, they never lost the spirit of mountain biking, the fun factor, and the realization that there is much more to mountain biking than racing.” –Hans Rey

However, racing is in their blood. The Rads host two of the longest continually running mountain bike races in the world, the “Rad Challenge” and the “Leaping Lizard”. The Rad Challenge began in 1984; the Leaping Lizard in 1983. Despite the underground nature of these races, they have grown in notoriety and have always attracted many top professionals. The Rad Challenge, which originated back in the day arising out of a bet between a local roadie and one of the Rads on what kind of bike could do the loop faster, is the closest thing they have to a cross country race. It starts with a road sprint, followed by a steep technical climb of 800 feet over one mile, leading to a gut wrenching fire road slog with each successive climb being harder than the preceding climb, and finishing with a steep technical downhill. The “Leaping Lizard” is a full-on downhill race with a short, but technical, descent.

“It was 1986 and my friend and mtb mentor, Byron Friday, and I were flying southbound down the I-5, heading toward the Laguna Hills. We were heading south from the Valley, going down to the legendary Leaping Lizard Free Fall put on by the Laguna Rads. The terrain the Rads rode was incredibly steep up and down, the guys were hard core riders back in the day, and this race was an early extreme downhill event. Well… the tranny blew up in the Volkswagen on the I-5 and we had to ride in from Orange County on our bikes. We missed the start but got to see the finish of the race as they plummeted into someone’s back yard in Laguna Canyon. The typical Rads post-race party had just started but Byron and I had to pedal our way back home to the Valley. It was an epic day even thought we missed racing the Lizard Free Fall. I did make it back another time to ride with Rads a few years later, courtesy of Hans Rey and Dave Wonderly. The Rads were legendary and truly a historical piece of the So Cal mtb scene. They are still going strong some 25 years later which is statement to their commitment to the sport of mountain biking. Long live the Rads!”
-Johnny T.

The Rads are the soul of mountain biking. The Wednesday Night Ride, as well as other annual events and traditions (including their almost sacred fire pit where the group meets, eats, and drinks after every ride), are the backbone of the club. The Rads are no traditional club, where one can simply sign up and join; it is more like a fraternity – where new members get nominated once they have proven themselves on and off the bike, and only get rewarded with membership if every single member agrees. What makes the club unique is that they are all from different backgrounds and professions. Today, the club has about 80 members; the oldest member is over 70 years old, while the youngest is about 30 years old. Carpenters, doctors, stockbrokers, industry marketing people, construction workers, dental workers, teachers, stain glass artists, and professional mountain bikers are just some of the members. The club also includes several national champions and hall-of-famers. Visitors who join on rides are never disappointed; they are often left wondering how a bunch of guys with jobs are so proficient on bikes. These events are about more than just riding bikes, they are social as well, and are typically accompanied by lots of humorous banter, gamesmanship, and beer drinking around the Rads fire pit. The Laguna Rads are the embodiment of mountain biking, as the camaraderie of this group extends beyond the bike and into members’ personal lives. They rally to aid each other whether it is a fire, flood, earthquake, or any other accident. The Rads influence has crossed many international borders, and they have influenced bicycle clubs and riders all over the world. Some European clubs have modeled the club and its philosophy after the Laguna Rads. This is due to the fame the Rads have acquired through media exposure and videos. The Laguna Rads are a constant reminder of why we ride bikes. They embrace the spirit of the sport, despite the sport’s seeming departure from camaraderie and adventure. Riding mountain bikes is not just about racing, but about shared experiences, camaraderie, adventure, and fun. These are a bunch of average guys that have come together to form something extraordinary.

“I have ridden with many people around the world and many places, but I have to say that over the last 8 years, some of my rides with the Rads have been the most memorable. The group ranges in age, style, ability, profession, character and skill, but the things they have in common: heart, passion, strength and camaraderie, make them one of the most unique and fun bunch of guys to ride with. Despite all of these differences, the experience at the fire pit every Wednesday I am privileged to have been able to ride with this group so often.”
-Richie Schley

“The Rads have been riding week in and week out for over 30 years, all because they have a similar passion: biking and spending time with friends. It is the essence of what makes us outdoor enthusiasts.” –Darren Berrecloth

Please consider putting the Laguna Rads on the MTB hall of fame ballot in the pioneer category. Thank you for your consideration.

Here’s their brick on the Mt. Tam Legacy Wall
at the Mountain Bike Hall of Fame in Fairfax, CA. 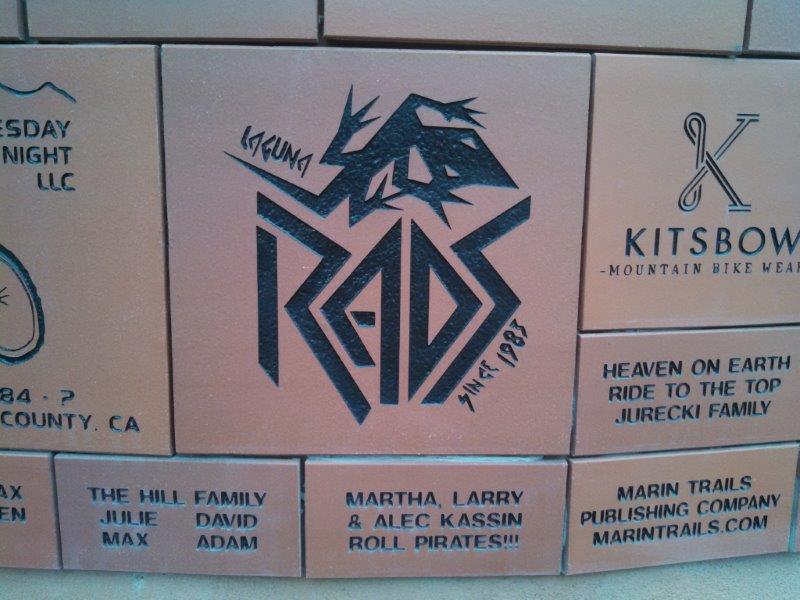