The Koski Family (Earl and Lil, sister Kris and brothers Erik, Dave and Don), worked together at their Cove Bike Shop, a comprehensive shop they founded in 1970 in Tiburon, California. The Cove sold and serviced all types of bicycles, and played a key role in the early days of mountain biking. By the mid-1970s the shop was doing a brisk business in the off-road market. The Cove is considered the first business to specialize in mountain biking. By the early 1980s, Yozo Shimano, Junzo Kawai (Suntour) and many others came in to experience the “buzz” the shop was creating. Many of these people went on to become Hall of Fame members and industry leaders. 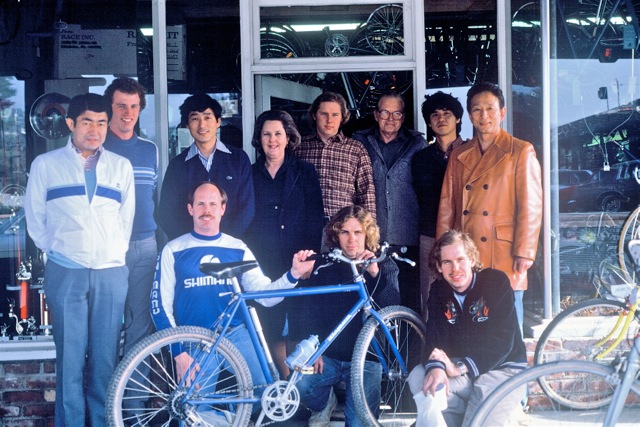 Eldest son Erik Koski was inducted into the Mountain Bike Hall of Fame in 1989. Brother Don Koski was a born innovator who worked with many of Marin’s early contributors to mountain biking. In the mid-1970s, Don put his fertile mind toward solving off-road concerns of the day. He welded a rear swing-arm onto a discarded Schwinn Varsity frame and added a motorcycle shock. He talked with BMX component supplier Cook Brothers Racing of Santa Ana, California, and drew up what was essentially an extended tubular BMX fork to fit 26-inch-wheel klunkers. These forks would become the first production component in mountain biking. Joe Breeze used Koski-inspired Cook Bros. forks on most of his first Breezers (1977-78) and Gary Fisher later put one on his iconic, geared Schwinn “Excelsior” klunker.

Sometime in this period, Don and brother Dave used electrical conduit and re-used frame components from a Schwinn Varsity to put together another off-road frame. In 1978, Mert Lawwill, a customer of the Cove Bike Shop and 1969 AMA Grand National Motorcycle Champion, took an interest. Using Don’s frame and Cook Brothers fork as prototypes, Mert had Terry Knight, his welder at the Harley-Davidson “skunk works” in Hayward, produce the Lawwill-Knight ProCruiser. Don and Dave spec’d the parts. By 1979, gleaming chrome-moly steel ProCruisers were filling the ranks of Marin mountain bike rides. By the early 1980s, Lawwill-Knight had produced more than 500 ProCruisers.

Don and Dave’s motocross background gave them a leg up in sourcing off-road parts for bicycles. In this period, before the internet, before mainstream bicycle magazines discovered the sport and before the founding of mountain bike magazines, mountain biking was barely known outside Northern California. In 1980, the family produced the “Trailmaster” catalog, the industry’s first mountain bike mail-order resource. It listed complete bikes for sale including Breezer, Laguna Cruiser and ProCruiser, and also framesets from Champion and Cook Brothers. Other brands in the catalog included Magura, Phil Wood, Suntour, Suzue, Sturmey-Archer, Ukai and Araya. Erik Koski’s stellar technical drawings accompanied many of the listings. The Trailmaster catalog was an early link to the outside world, extending the role and influence of the Cove Bike Shop well beyond the shores of Marin. It was a vital tome for enthusiasts, component makers and builders from around the globe in the sport’s earliest days, and helped grow the industry.