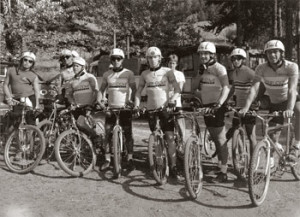 The first country outside the USA to be exposed to Mountain Biking was Canada. In 1980, John Gadsby a Vancouver, BC based engineer and a lifetime racing and touring cyclist, stopped by Gary Fisher’s shop in Fairfax, California and bought a couple of mountain bikes built by Tom Ritchey. He kept one for himself and brought the other to Larry Ruble’s Cycle Shop in Maple Ridge, BC.

That same year, Doug “Dewey” Lafavor (Link in the website to a story about Doug), Charles “Chaz” Romalis and Ashley “Nummers” Walker started the Deep Cove Bike Shop in North Vancouver , BC. The store was only open from 12 noon until 5 p.m., 5 days a week and it was the first fat tire only store in Canada. It specialized in Trailmaster cruisers built by the Koski Bros. in Tiburon, California and Cook Brother cruisers built by the Cook Bros. in Santa Ana, California. Dewey, Chaz, Ashley and their disciples charted and built most of the original trails on Vancouver’s North Shore Mountains.

As West Point expanded to a 3-store chain in 1981, Jacob Heilbron founded Rocky Mountain Bikes, supplying Ritchey Mountain Bikes to stores across Canada. BC ski bums Pippin Osborne and Peter Hamilton were two of the store managers, leading night time and weekend rides all over British Columbia. St. Louis native Dan Gerhard moved to Vancouver after meeting his wife on a Rocky Mountain bike tour, and was the 3rd store manager.

This group of original Canadian mountain bikers formed the first mountain bike association outside the USA, and called it CORBA (Canadian Off-Road Bicycle Association), and started an informal series of races in 1982. An unofficial Canadian Championship was held in 1984, won by Canadian roadie, Alex Stieda.

Rocky Mountain Bicycles opened a frame building facility in 1984, with lugged road and mountain frames built by English expatriate Derek Bailey. Paul Brodie, an artist and motorcycle head began by painting, then bronze welding the mountain bike frames in 1985, when Rocky Mountain Bicycles began producing and supplying their own brand mountain and road bikes across Canada. The Vancouver trademark sloping top tube was initiated in the same year when Paul Brodie built the first Rocky Mountain “Avalanche” frame for Jacob Heilbron. Pippin Osborne was frame designer and Dan Gerhard was the national sales manager of Rocky Mountain during these early years.

Today, Chaz Romalis and Ashley Walker still preside over the Cove Bike Shop, the largest mountain bike only store in Canada. They introduced the Cove brand of mountain bikes in 1995. The North Shore is now well known for some of the most technically demanding trails in the world.

Peter Hamilton sold Syncros (now a division of GT Bicycles), and is now based in Santa Ana, California. Pippin Osborne is now with Banshee Bicycles.

Paul Brodie’s frames have been considered among the most finely crafted anywhere, and although his production is quite small, Brodie bicycles are produced to his specifications and distributed world-wide by Vancouver-based company Cybersport.

Larry Ruble was Rocky Mountain’s bicycle product manager from 1990 – 1995 and is currently managing Bikes on the Drive at Simon Fraser University in Burnaby, BC.

Dan Gerhard is once again a US-resident, the token American in this nomination. He heads up Kona’s world headquarters in Ferndale, Washington, about 100 miles north of Seattle. Doug Lafavor is the technical designer in Kona’s product group. Jacob Heilbron is the COB of KonaWorld, Kona’s design center in Vancouver.