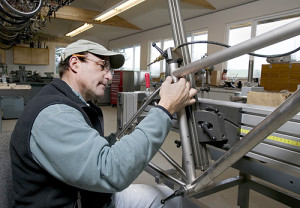 “It all started when I was a child and my brother took me for a ride on his big fat-tired bike. He drove and I sat on the handlebars. He used to tell me that we would break the sound barrier if we went any faster…. It was then that I knew I needed to have a bike of my own.”

Steve Pott’s first bike was broken by his brother, who rode it helter skelter through the door, five minutes after they unwrapped it one Christmas morning. The man who fixed the treasured toy, was none other than Bill Breeze, Hall of Famer Joe Breeze’s father.

A member of the original Marin county gang, Potts was inspired to build his first mountain bike to get out in the mountain wilderness to pursue his first love, fishing. Potts knew a bike had to be sturdy and have several gears in order to get where they wanted to go, so he collected assorted components at the junk yard and assembled them in his high school metal shop. That hand painted pinstriped bike led to the development of Wilderness Trail Bikes, in which Potts is now a dedicated partner, designer, researcher and bike builder.

“ All the design and production goals require riding bikes for inspiration for new ideas,” he says. “Designing components means: research, deciding whether an idea could be marketable, developing prototypes, testing, making the changes, engineering, patents, finding the materials that are best suited for the part, and all of this can take years.”

Potts has traveled extensively seeking mountain bike adventures, he and Joe Breeze biked the Southern Alps of New Zealand and found their presence on bikes was intriguing to the people there. He finds this aspect of the sport most inspiring. In 1990, Steve quoted, “Being involved in; mountain biking has allowed me to turn other people on to a good lifestyle, health and the outdoors.”