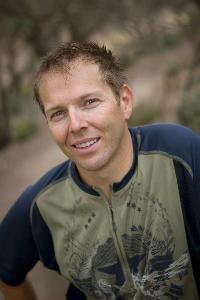 He was all by himself that day. Just the trail and the breeze and the bike. He kicked up the crank, pushed off and let go of everything. That was the moment Steve Blick found himself.
If you’ve ever dropped sweat for the chance of a trophy or thrilled to the spectacle of two wheeled warriors, you know Blick. He’s in the racecourse lot, making sure riders are hooked up with the latest and greatest from Oakley. He’s at the finish, fueling the final push of trailing contenders with words of inspiration. He’s at the hotel, seeing that even the poorest privateer gets a burger and fries and a pat on the back after coming in 49th at the Super D.

Blick jumped on a bike in the ’70s, rode BMX in the Bay Area and took his bliss to high elevations when Dave Vanderspek looked at him with a crazed grin and called mountain biking “a new way to get rad on the dirt.” The year was 1984 and Blick was hooked.

Desert Cyclery in Rancho Mirage was his first bike shop gig, a way to feed a growing addiction to velocity, wide-open spaces and whirring chains.
With the light of inspiration from his mother, Blick saw his way to R&D with various organizations including Shimano’s SKUNK development group in the early ’90s. After that came the legendary CVC in Castro Valley, then Blick got his foot in the industry door at Marin where he learned the art of style from Marla Streb.

In 1997, Bob Hadley saw potential and brought Blick to GT where he began taking the message of mountain biking to the masses.
Three years later, Blick stepped into a bunker of mad science known as Oakley, and since then he has been a force within the fortress. He devoted himself to championing breakthroughs in eyewear, apparel and footwear that serve the greatest athletes on two wheels without a motor.

Oakley’s VP of Sports Marketing, Pat McIlvain put it simply, “It’s inspiring to watch the ‘gadget master’ at events and see how he brings it all together — not just the things he works with but the people. His ability to connect industry, media and athletes has earned him this high honor, a salute to the way he fuels the sport with his own brand of passion.”

Blick’s passion is contagious, so it’s no wonder he’s passing the torch of inspiration to his son Tyler and daughter Kira. Along with wife Jen, they are the ones who keep him grounded as he taunts gravity and pushes the limits of possibility in high places.

The sport will always be part of Blick’s life, whether he’s jumping cliffs with elites like the infamous Laguna RADS and MINJIN tribe or just spreading the word as one of the premier ambassadors of mountain biking. Because for Blick, it’s not just a sport. It’s something tied to the fiber of his soul and part of what makes him breathe.