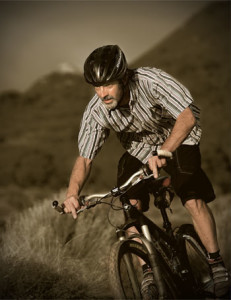 I first met Bob in 1979 at the Four Faces bike shop in Durango, Colorado. At that time I was a student at FLC and an aspiring roadie. Bob and a fellow named Forrest Yelverton, who would go on to create such legendary bikes as the 1996 Olympic track bike “Superbike2” and others, held court as the resident mechanics at the Four Faces shop just off Main on 9th street hard up against the railroad tracks. At that time, the arch rival shop in town, which was a stone’s throw away, was the legendary Outdoorsman, where John Bradley, later of Trek and now Orbea, ran a spic and span operation. I remember quite well that I chose to be a patron of the Four Faces as it was a lot more “hippie” than the (at that time) more traditional gun and hunting shop that the Outdoorsman was. When I returned out west from my last summer at home with a sparkling Raleigh Super Course and started to tackle the hills and passes around D-town, I soon became highly familiar at Four Faces as I continually wore out and broke various parts of my bike. Invariably, with his great attitude, surgical skills and deep knowledge of cycling mechanics, Bob and I started a friendship that, even though I seldom see him these days, starts back up the same way it was, the second we see each other. Bob is one of those, of which there are sadly too few of, people that we have in the business that takes the time to educate and demonstrate to the neophytes in the sport of cycling. He is a truly good soul with a genuine heart.

As the late winter / spring training season got going in town (actually it was just me and three other guys) it became evident that Bob was not really into the whole racing thing. He is a steady eddy and can ride all day and all night sometimes (and has the record on the original “Death Ride”, Durango to Durango via Silverton, Ouray, Telluride and Mancos in about 13 hours, to prove it ) but he was not really into the hectic, egotistical pursuit that is road racing. He was, and is, the consummate support man for racers, as his long career with Johnny T, and his Tour De France stint will show.

But, more importantly to this story, he was also the first guy I ever saw pull out a handmade Mountain Bike. I will never forget him wheeling this thing out into the open one fine spring day over 25 years ago and saying to me with his trademark huge grin that was buried in his thickly bearded face “Marky, you gotta try this” ..I looked at him, astride my lightweight road machine and said “What the hell is it ?” Bob says “it’s a klunker bike, man !” I said “you got that right”….”Bob..what do you do with it ?” …He said “I rode it up to Hesperus and then over Kennebec pass and then down Junction Creek last week ….” “No fucking way” I spit out “how the hell long did that take?” I asked in sheer amazement…”About 8 hours, give or take” he said calmly, as though the journey was the equivalent of going to the store down the road for beers….

That bike must have weighed 50 pounds with its steel Empire frame and springer fork, Bendix two speed kick back, chrome steel rims with massive 27 TPI knobbies, brown leather Brooks saddle, one piece Cro-Mo crank and steel chainring…. He had the bars tipped and the pedals were just your basic rubber block……that bike was nothing fancy but seriously stout….

This ride he took it on, a loop of about 40 miles all told, climbs to a high point of about 12,500 feet from the town elevation of 6,500 and is 70% dirt with an extended descent on a highly sloping scree field, …..not for the weak kneed or faint of heart….that same scree field did leave a large scar he landed face first into it when he was pushing the limit of one of his new machines. For those on the scene it was a ghastly image to see a large flap of Bob’s face hanging as he lay there in the sharp gray rocks piled about the base of the top of the pass…..a long, long way from help and no cell phones back in that time……

But Bob became enamoured of his Klunkers and became a man of the gospel as far as the Fat Tire religion was concerned….with his skinny tired road machine languishing on the hook in the back ….he made bike after bike….always finding something new…..a TA crank fitted to rigged up One Piece BB, some of the first bear trap pedals I ever saw, purloined off of an early BMX bike…alloy rims from the BMX side of things as well….slowly but surely he knocked off pounds, added gears and moved onto cantilever brakes…..ever perfecting his machine. Until one fateful day, when the Senator, Scott Carpenter, one of the original road reps for Specialized, pulled up outside of Four Faces and wheeled in a sample of the first ever production Stumpjumper…..like a wary dog, circling a new rival, Bob looked the shiny blue beast over……he made various noises of incredulity and disgust and looking up at Scott, said with a sniff…..”how much ?” The Senator replied smugly “$950.00 retail”. Bob almost blew apart at the welds…..”What, you kidding me…for that piece of kaa kaa…you’re out of your mind!”… and so on and so forth…….Scott sat there and calmly took it, polishing his fingernails while weathering the diatribe…….when Bob had exhausted his catalogue of epithets Scott just said…..”and we’re all sold out”…Blake, the shop owner, said “Except for my ten right ?” …Now Bob really didn’t know what to do….except throw down his shop rag and stomp back to the stand…….

That minor commercial setback however did not deter him from his continual pursuit of klunker perfection. When the Four Faces folded he moved onto the Durango Cyclery and became a trusted advisor for such pioneering brands as Miyata and Cannondale….H-Ball, who twirled a wrench now and then (when forced) worked there as well, and he and Bob could often be found in the back wrestling with the early production rigs. If anyone came within ear shot, Greg would let you know in no uncertain terms how bad your bike sucked and how you should be getting on whatever they had in stock at that point it time…..Bob however was the antithesis of Herbold and was the guy that could quietly and competently rebuild your Sturmey Archer three speed coaster brake at a fair price in short notice……from there he went on to fame and maybe a little fortune as John Tomac’s wrench for many years and I believe gave huge amounts of invaluable feedback to many of the parts makers and frame makers in the business…..Bob has been with us since the beginning…he does not toot his own horn so to speak so I am tooting it for him……anyone who has been in the business and the scene since the start knows Bob and knows what he has contributed to the sport and the science of mountain bikes….and for that reason I feel he deserves the honor and recognition of being in the Mountain Bike Hall of Fame.