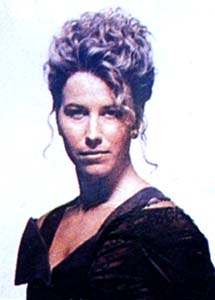 The 32-year-old woman from Grainau, in southern Germany, has experienced all the ups and downs in mountain biking. In 1987, after a great career as a professional skier, she took up cross-country mountain biking, where she won numerous Grundig World Cup races. Fearless on descents, she saw that Downhill was her calling in mountain biking, and in the 1990s, she won nearly every title in downhill mountain biking, including the Grundig World Cup in 1993 and 1995. She brought the spirit of mountain biking to Germany. Her beautiful outlook and her nice character have always been an advertisement for mountain biking. Regina was the first professional mountain bike racer to have a photo story in the German “Playboy.” It’s not only Regina’s way of life, which is perfect for the spirit of mountain biking in Germany, but also the way of life of her whole family, which impresses everyone who knows them. Regina’s husband Peter has been a racer from the beginning and their two children are following their parents in the race scene.