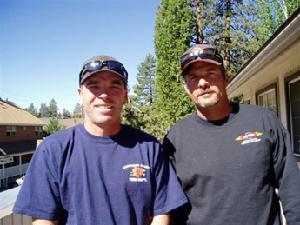 Pat & Tom and their Team Big Bear Mountain Bikes promotion company have produced more than 250 mountain bike racing events starting with the Rockhopper South in 1986. Since then they have produced 20 NORBA National races in Big Bear Lake, California and Deer Valley, Utah, including two Finals races and three World Cups. Their timing company has been providing results for many other promoters, and Tom has been co-administrating the NORBA NMBS. For over 18 years they have been providing racers with professionally run events with diversified formats, including Calif. State Series, Women’s Only weekend, 12 Hour XC & DH racing, Downhill Mania’s, 100 mile events, and The Snow Summit Amateur Cup Series.

Pat Follett has spent most of his life in Big Bear Lake. He opened a shop there in 1983, becoming the first Southern California dealer to sell mountain bikes exclusively. Pat had strong feelings that MTBs had a promising future.

Patrick also guided Snow Summit Resort into becoming a mountain biking area which attracts 25,000 cyclists each season and provides the venue for their NORBA National races.

One of Pat’s best memories is of “his” Olympic moment. Pat was the test rider on the Olympic course the night before the mountain bike competition. A full rehearsal was scheduled with 30 fixed cameras, 2 helicopters, 2 motorcycles cameras and one helmet camera which Pat volunteered at the last moment to wear. It was the ride of his life.

Tom Spiegel was raised in Point Pleasant Beach, New Jersey. His first bike was a purple Schwinn Stingray, which he used to get to and from the beach. Then he grew into a Schwinn Typhoon and today Tom rides a Yeti. Mountain biking has allowed Tom to fulfill his dream of traveling all around the world. He attended the first Canyonlands Fat Tire Festival in Moab, Utah and recently ventured to New Zealand & Australia on his mountain bike.

Eleven years ago, Tom left his job and rode 2,800 miles from Vancouver, BC to Alaska.

Tom was a three-time member of the U.S. National Downhill Team. In 1994, he brought Downhill Mania, with its novel four-rider format, to TV on Prime Sports.

Tom & Pat consider themselves mountain bike ambassadors. Through their race promotions they introduce the sport to new riders, make riding more exciting to experienced racers and continue to grow with the sport as it changes. Very concerned about maintaining trail access they have worked hard to educate riders on proper trail etiquette through word of mouth and printed materials. As a result, all Big Bear Lake trails and roads have remained open.

Bio’s compiled by Pat & Tom, edited by the Hall of Fame.