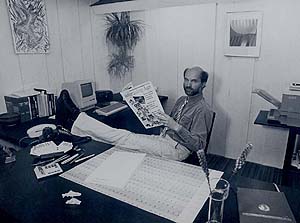 Note: The Mountain Bike Hall of Fame is not sure as to the validity of this biography. Because he was on the lam when he lived in Crested Butte, we think the information he gave in this biography maybe somewhat fictional.

Born early enough to be a beatnik (December 15, 1940), Murdoch shunned the coffeehouse existence and went directly into mainstream America. He put his University of Pittsburgh Mathematics education to work in 1962 as the manager of the Troubadour Café Theater in Hollywood, California.

The diversity of personalities attracted to bicycling is demonstrated by Murdoch, the computer guru, a man whose goal was to market one million pieces of a product and live to be 100 (presumably, in that order). He fled the fast lane of rock and roll, after investing his fortune in the San Francisco music scene, and all but abandoned the computer world, leaving both industries to their own resources while he resided peacefully in Crested Butte, being a “marketer”

Marketing and promoting bicycles (of all things!) was an unpredictable move for Murdoch to make, but his interest in old newspaper boy bicycles led him to begin by rebuilding old coaster brake bicycles for local use in 1974. He opened the first shop exclusively for mountain bikes in the country, Bicycles, Etc., in Crested Butte in 1976. Bicycles, Etc. is currently still operating in Crested Butte under different ownership.

“Promoting Crested Butte and Fat Tire Bike Week as a focal point for information and interest on the development and spread of fat tire bikes” is, in his opinion, Murdoch’s most important contribution to mountain biking. FatTire Bike Week has continued to be a major annual event for riders all over the country. We have him to thank for making Crested Butte a Mountain Bike Mecca.