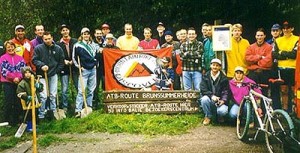 Mountain Bike Club Discovery was founded in 1989 in Landgraaf in southern Holland. Started by a group of friends, who discovered the mountain bike was perfect for riding responsibly in nature, the club had more than 200 members three years later.

By 1992, the club had organized a Grundig World Cup race. In these early years the club faced access problems as were already common in America. To repeal or reduce trail closures, the club began a process of communication with landowners and nature-protecting groups. The International Mountain Bike Association (IMBA) was instrumental as a resource for problem solving. It took five years to create 50 miles of trails, which are built and maintained by club members. Exceptional in this process is the intense cooperation with the largest nature protection and landowner organization, Natuurmonumenten. This organization switched from being a strong opponent of mountain biking to accepting mountain biking as responsible recreation in nature.

The club was nominated by IMBA and Mountain Bike Action magazine in 1998 for their work in educating and lobbying for mountain bike trail access.