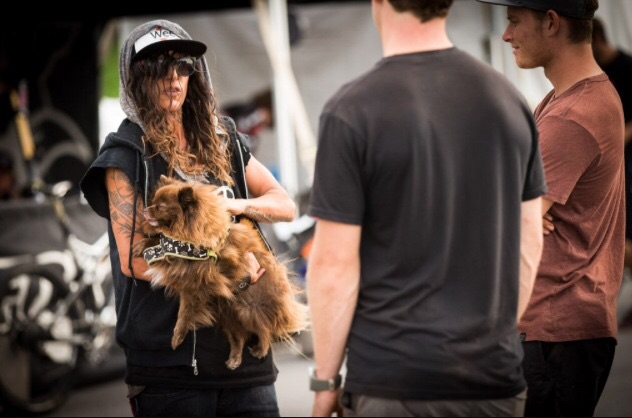 One of mountain bike racing’s superstars and a cultural icon, Missy Giove is the all-time leader in NORBA downhill wins with 14, and is fourth on the list of World Cup medals with 11. Her additional accomplishments include three NORBA downhill overall crowns, two World Cup overalls, and the 1994 Downhill World Championship. Missy won an X Games Gold in Dual Slalom in 2000.

Before she took up cycling, Missy Giove was a nationally ranked downhill skier. She found her love for climbing and descending through skiing—her first season of ski racing she couldn’t afford a lift ticket so she climbed the hills. When she borrowed a mountain bike one summer, she fell in love with the sport. She entered her first mountain bike race that summer, won it and was spotted as a major talent.

Missy’s fearless style and personality brought a tremendous amount of attention to the sport of mountain biking. Bold, colorful and original, Missy was a great interview in print and on screen. She made memorable appearances on mainstream TV shows such as Jon Stewart and Conan O’Brien.

Early in her career, Missy raced for Yeti along with other top downhill stars such as Myles Rockwell, Jimmy Deaton, John Tomac, and Johnny O’Mara, under the management of industry veteran and former owner of Yeti Cycles, John Parker. After establishing herself as the top US women’s downhill talent, Missy “The Missile” moved to the larger corporate-financed Volvo-Cannondale USA cycling team. Together under the Cannondale badge, Missy Giove and Myles Rockwell dominated many of the US downhill races in the early 1990s.

Missy’s contributions to mountain biking helped expand the sport, as she influenced and helped shape the beginnings of Gravity and the Freeride scene.

Missy announced her retirement from full-time racing in August 2003 and would remain an icon. In March 2004, she appeared in an episode of the cartoon Rocket Power  titled “Missile Crisis.” After retirement she helped finance travel and fees for several up-and-coming downhill cyclists.

Passionate, seemingly fearless, Missy was one of the biggest stars the sport of mountain biking has seen. Her personality, enthusiasm and attitude on and off the bike helped shape the image and lifestyle of the sport, while inspiring thousands both within and beyond the sport.