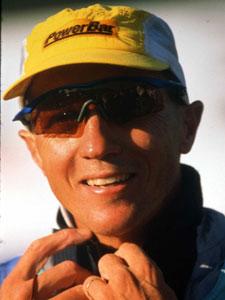 Mike is truly a pioneer in our sport.

Mike is not only one of the most accomplished athletes in the history of Mtn Biking, he has also made important contributions in race promotion and athlete representation with the UCI.

Mike was the first American athlete to focus on Europe for the entire world cup season and battle the Euro’s on their continent. Mike was the first athlete representative on the UCI board at a critical time in the development of international MTB racing. Many of the old school UCI board members were trying to implement road racing and cyclocross style rules for MTB racing. Mike was successfull in keeping MTB racing rules “true to their roots”. Mike promoted the Tour of the Rockies Stage Race in Vail in the late
80’s and has been a pivotal player in Vails support of numerous World Cups and World Championships promoted by the Vail Valley Foundation.

Mike is quite possibly the best adventure racer in history, a sport which includes mtn biking as a key element and may surpass all other forms of mtn bike racing in its popularity and media exposure.

Some of Mike’s outstanding accomplishments include:

Mike, born in Dubuque Iowa, one of 10 children, resides in Vail, Colorado with his wife, Emily, and their children, Heidi and Christian. The family joins in on Mike’s traveling and training adventures whenever
possible.