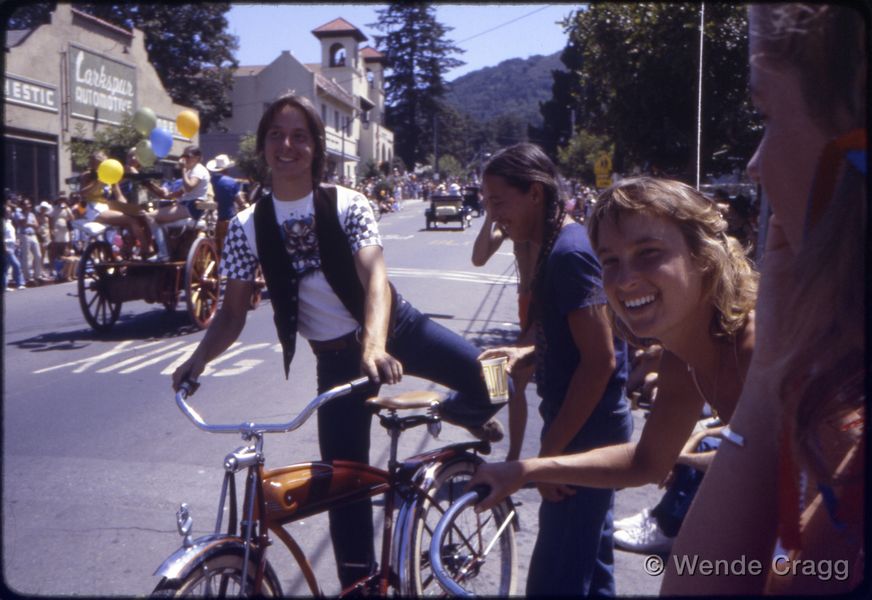 Marc and friends at the 1978 Larkspur Fourth of July parade.

Marc is a Bay Area native, born in Redwood City. His family lived in San Francisco during his grade school years and they moved to Mill Valley in Marin County in 1969. Marc started riding as a way to get to Redwood High School in 1971. He quickly joined the lively mountain biking scene there, and fell in love with the 1930’s and 40’s vintage balloon tire bikes. He started riding the trails and fire roads on Mt. Tam that year with school friends after classes and on weekends. The next step was becoming a bicycle collector, at first as a way to keep his own bikes supplied with parts but then as a way to enjoy the beautiful old style and craftsmanship. Marc was one of the earliest riders exploring the incredible single-track trails and fire roads of Mt. Tam, and with his fellow “inch-pinch” friends they enjoyed the whole mountain, long before trail closures went into effect. In those days everyone shared the trails and got along.

As his appreciation for cycling grew, so did his involvement with all kinds of bicycles and everything related to the sport. Marc soon discovered fine European road racing bicycles and in 1972, got his first “serious road bike” and started racing in the Marin High School Road Racing series. Out on a training ride one day, he rode up alongside a guy with a long blond ponytail on a bright green & yellow Coppi. They struck up a friendship that was to last a lifetime and at his (“Otis” Guy’s) invitation, Marc joined Velo Club Tamalpais (VCT), which was at the time, the road racing club in the North Bay. Through VCT, Marc, Otis and Joe Breeze became fast friends (literally), riding tens of thousands of miles together on and off road. 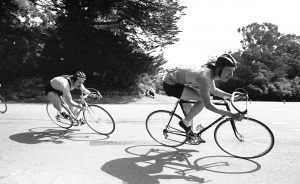 Marc introduced mountain biking to Otis and Joe and the three of them “infected” the club from one side, while Gary Fisher and Charlie Kelly did so from the other. Resistance was futile, and the other VCT members quickly began to include ballooners in their stable of favorite bikes… before long almost everyone was riding them. The “Roadies” had officially caught the bug.

Marc became a full-time amateur road racer (there was no professional class in the US at that time). After starting in the Junior class in high school, he progressed to a Category 1 racer his first year in the adult classes on Team VCT in 1974. Marc was one of the top riders on Team VCT/Siphon Art from 1974 through 1978, competing in national-caliber racing all across the US—while still enjoying mountain biking in Marin. Marc was supported in his racing efforts through working at local bike shops, and also through the Team’s sponsorship by Alan Wulzen’s Siphon Art company and Sunshine Bicycle Works, and by selling his race winnings—a common practice at the time. A career as a professional road racer in Europe was a dream of Marc’s at the time. 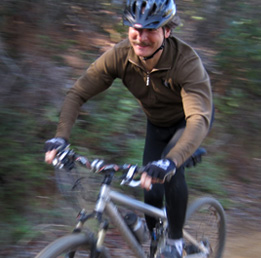 A serious crash in 1978 at the Olympic Training Camp at Squaw Valley, CA led Marc to reevaluate his dreams of becoming a European Pro, and he left Marin later that year seeking adventure and the unknown in his ’53 Chevy pickup. He found it off the Oregon Coast crewing Salmon Charter boats and on the Bering Sea in Alaska fishing for King Crab. Somehow, after surviving a couple of years of that, he moved to Seattle where he started a new life and ran a successful elevator contracting business for twenty-five years, which he sold and retired from in 2009.

Marc was one of the founding board members of SevaChild International, a nonprofit child-aid organization which began operations in 2007 uniting rural orphanages in India together in a national aid network. Today, SevaChild distributes nutritional products and clothing to over a million children annually. SevaChild also facilitates child sponsorship opportunities and other humanitarian projects.

Marc was inducted into the Mountain Bike Hall of Fame in 2009 as a Pioneer with his old high school mates, the Larkspur Canyon Gang. In 2010, he moved back to Marin and settled down in Fairfax with his wife, Lena Maria. Marc happily rejoined the Marin cycling community and is one of the founders and builders of the Marin Museum of Bicycling, serving as its current President. 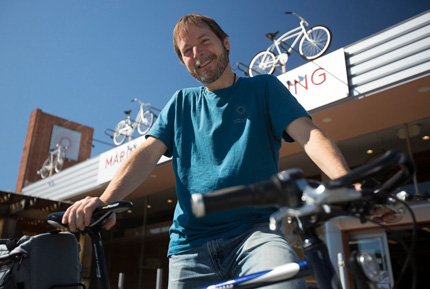