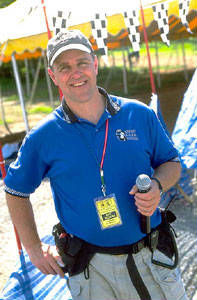 Laird was born into a military family. His dad was an army captain and much of Laird’s childhood was spent re-locating from one military base to another. Laird learned to ride a bike when he was 5 years old in Ethiopia. His first mountain bike was a 1983 Ross, Force-1.Today, Laird rides a 19.8 lb. tricked out Cannondale.

In 1992, Granny Gear Productions, a company Laird formed the prior year, was responsible for the creation of the 24 Hours of Canaan, the first 24 hour mountain bike team relay race in the country. In 1995, Granny Gear created the 24 Hours of Moab race. Having secured Newsweek magazine as title sponsor for the 24-hour races in 1996, Laird has been educating potential corporate sponsors and their advertising agencies about the valuable demographic cross-section represented in the sport of mountain biking. The 1996 Canaan race had over 1,700 participants. Laird brought charitable fund-raising to his races in 1997, with The American Lung Association’s “Early Bird” Registration Program, which raised more than $52,000 in it’s first year.

Bio compiled by Laird Knight, edited by the Hall Of Fame

In the ten years since the inception of the original 24 Hours of Canaan, reporters from numerous publications have taken note of the phenomenal success of The 24 Hours of Canaan. There must be some consensus on what their readers want to hear about because they always ask the same questions. These are the questions that I am asked by reporters most frequently:

Q: When was the first 24 hour race? A: 1992;
Q: How many teams did you have the first year?
A: 36;
Q: How did you think of it? A: This question is not as easy to answer. Ideas are the products of lifetimes. To this day, I bear a scar on my left hip that I aquired when I was five years old. I crashed while riding my bike at night with one hand holding my handlebar and the other holding a burning stick of wood that I had pulled from a back yard fire. Some of the bikes we rode as kids had battery powered lights built right into the frames and others had lights powered by a generator that could be flipped over to engage your tire. The faster you went the brighter the light. (Hey, there’s a good idea.) As a young teenager, I followed motor sports on TV and in the magazines, so I became aware of all-night races like the famous 24 Hours of LeMans, and motorcycling’s grueling International Six Day Trials (ISDT). I wanted a motorcycle but my Dad wouldn’t buy me one. I could have one, but I’d have to pay for it (fat chance). So, my similarly situated
friends and I rode our bikes like they were motorcycles. We made trails all through the woods. We made jumps. We made racetracks. We made noises like our bikes had motors. We practiced skidding them and carving power-slide turns, just like motorcycles. Not as fast, not as expensive, not as loud, but just as much fun.
In 1981, as a college sophomore, living in Boulder, Colorado, I could not believe my eyes when I walked past the display window of The Spokes Bicycle Shop. I stood stunned, entranced, fascinated. My imagination could not help but grasp the seemingly limitless
possibilities—a bike designed to go off-road like a motorcycle! But at $650, it was just too expensive for this college student, living on a budget.
While I saw my first mountain bike in Colorado, I rode my first mountain bike in West Virginia. Ironically though, it was cross-country skiing that brought me to the little mountain town of Davis, West Virginia, to manage a Nordic Center at Blackwater Falls State Park. And it was cross-country skiing that planted the seed for 24-hour mountain bike racing. With the short daylight hours of winter, the sun would set soon after quitting time. The only way you could get in some skiing of your own was to ski at night. On a full moon night we’d ski, some times till the wee hours of the morning. It doesn’t take much light to ski at night. The snow is so reflective that even a clear, star-lit night can provide you with a semblance of visibility. On cloudy or moonless nights we’d ski miles into the deep woods with cheap plastic “Wonder Light” brand head lights. They were more powerful (6 watts!) than the existing crop of penlight based headlights, at the time, but they were built oh so cheaply! We used to joke that we “wondered” if they’d last the whole trip. It was many a night that we limped home on beams of light that looked more like light, orange stains on the snow than anything you would want to rely upon to actually see where you were going.
During the summers in Davis, we began exploring, with our mountain bikes, the very trails that we had skied all winter.These were the early days of mountain biking, certainly by East Coast standards. Mountain bikers were characterful, fun-loving folk (still are and
hopefully, will forever remain so). There was so much camaraderie amongst those of us who had discovered these wonderful machines. As I got to meet more and more mountain bikers, it was easy to see the need for organized events. Any excuse would do, but racing was the best excuse available.
In 1983, I hosted my first event, The Canaan Mountain 40K. Twelve racers started, none finished. It was a great race. The next year I organized the first
mountain bike point series, The Canaan Mountain Series, which continued well into the nineties. In 1988, I hosted the first Mid-Atlantic NORBA Nationals. It was the largest race in the country, that year. In 1990 and 1991, I produced the Tour of Canaan 2-event Stage Races. It was at the awards ceremony of The ’91 Tour of Canaan that I announced my plans to introduce The 24 Hours of Canaan, a team relay race that who go from 12 Noon Saturday till 12 Noon Sunday. The announcement created a hush in the room, as people grappled with the concept. It was a pivotal moment in the history of mountain biking and as the hush turned into a buzz, it became clear that we were all about to enter uncharted territory. I wrote the rules for the new format over the winter of ’91-’92, but really, the idea of the race had been brewing in my head since 1988. It was the advent of high-end lighting systems like those from our original title sponsor, NiteRider, that delivered the enabling technology for this bizarre concept.