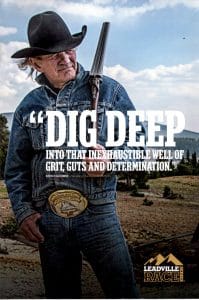 On August 13, 1994, with the deafening blast of the old double barrel shotgun echoing off the surrounding 14,000 ft. mountains, Ken Chlouber (Klo-ber) changed the face of mountain bike racing forever. Ken is the founder of the iconic Leadville Trail 100 Mountain Bike Race. He is a true pioneer in the sport of ultra-endurance mountain bike racing. Before the start of the Leadville Trail 100, no one had successfully married the sport of mountain biking and ultra-distance athletics, much less at elevations over 9,200 ft. The out and back format was unique to any race course, giving the “back of the pack” riders the opportunity to see the race unfold as the leaders passed by them on the return. Twenty-three years later this race still is a race for the “everyman/everywoman”. NORBA, who was the sanctioning body in 1994, had never insured or sanctioned an event of this nature. Their staff worked hand-in-hand with the Leadville Trail 100 race and due to the extreme nature of the event, gave special dispensation on some of their rules. It was also the first time a mountain bike race (other than the Olympics) was featured on nationwide television. The CBS “Eye on Sports” anthology series aired over three prime time Saturdays that October.

It all began in 1982. Leadville’s local mine, the Climax, closed. In that instant, 3,250 jobs were lost and in the Leadville community of about 5,000, that affected everybody. All too quickly the community began to feel the effects of economic devastation. Unemployment breeds its’ own abuses and the community had more than its share. The cavalry wasn’t coming.  We knew we had to grab our own bootstraps and yank hard. Without an economy, we would lose our schools and our hospital. If that were to happen, we’d lose our Leadville. Thoughts, ideas, suggestions to save Leadville’s economy were many and varied. Ken Chlouber came up with a plan for a 100 mile footrace; the highest, toughest, meanest, baddest 100 miles ever—the spittin’ image of Leadville. In 1983, Ken lit the fuse to the Leadville Trail 100. An immediate and overwhelming success, runners came from around the globe to earn their silver buckle. Soon they became not only athletes, but family. They learned in Leadville, to “DIG DEEP”.  It became much more than a race. It was a way of life—“Do more, Be more”. 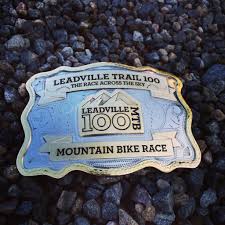 In 1993, a footwear race sponsor asked Ken to consider a mountain bike race.  For Ken, this was an opportunity to reach more people with whom to share the Leadville magic; to prove that inside each runner or mountain bike rider, there is an inexhaustible well of grit, guts, and determination. The Leadville Trail 100 family now had wheels, the mountain bike!

In 1994, 145 entrants rolled up to the start line of the inaugural Leadville Trail 100 Mountain Bike Race.  Over the years, a marathon, heavy half marathon, 10K, 50 mile mountain bike race, and 50 mile trail run were added.  In 2012, Colorado Mountain College in Leadville conducted an economic impact study that found that the 2012 edition of the races pumped more than 15 million dollars into the local economy.  Ken’s original intent of saving Leadville’s economy had come to full fruition.  The Leadville Trail 100 Mountain Bike family now numbers in the tens of thousands. Since 1994, Ken Chlouber has been the motor that has kept the epic, world-renowned Leadville Trail 100 Mountain Bike Race up-and-running.  Ken remains involved in the day-to-day racing business and is present and “larger than life” at every event, including the many out-of-state qualifying events. 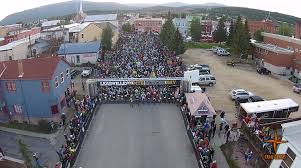 When the race was first televised nationwide, the response from across the nation was truly incredible.  Leadville Trail 100 Race headquarters would get calls from people who didn’t even own bikes, inquiring about the entry process, training and race nutrition.  It seemed everyone wanted to be a part of this amazing event.  Soon the race had entrants from every single state and numerous foreign countries, more than any other mountain bike race on U.S. soil.  In 2009 and 2010, film crews showed up and produced award-winning movies about “The Race Across the Sky” which were shown in theaters nationwide with some additional foreign showings.   There are very few mountain bikers that could tell you where the last three World Championships were held, but every single one of them can tell you where the Leadville Trail 100 Mountain Bike Race is held. The Leadville Trail 100 MTB Race is arguably the most well know MTB race in the world today. 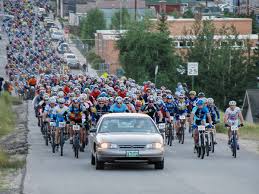 Today, several thousand riders apply for the coveted Leadville Trail 100 mountain bike lottery slots.  Qualifying races have been started across the nation; Texas, New York, California, Minnesota, and Arizona, with plans to expand to other states, as well as Europe, South Africa, and Australia.

In 2002, Ken created the Leadville Trail 100 Legacy Foundation, a 501 (c) (3), to provide a formal and public platform on which to collect and distribute funds.  The mission of the Legacy is to address community needs and support a better, brighter tomorrow for Leadville.  One of the Legacy programs awards a $1,000 scholarship to every LCHS student going forward to any type of higher learning, whether it is trade school or research university.

It would be difficult to chronicle the number of lives Ken Chlouber has touched with his involvement in the sport.  I’m sure Ken would tell you that his most important impact is the deep and lasting difference the races have made in the lives of Leadville Trail 100 entrants.  The Leadville Trail 100 family leaves this special mountain community knowing, “You’re better than you think you are and can do more than you think you can.”