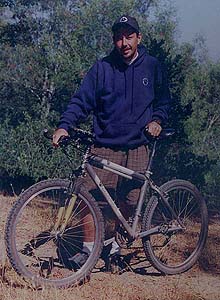 Keith was born on December 18th, 1954. He is married to Laura and is the father of two girls.

Keith started working on two-wheeled objects at the age of twelve, a passion that would follow him through life. At 14, he became fascinated with motorcycles and continued to ride, race and work on them for the following twelve years. His fine skills as a mechanic enabled him to experiment with engine and suspension improvements.

In 1978, Keith made the switch to human powered bicycles. He rode his first mountain bike in 1980 and the following year he started his own bike company in Sunnyvale, California. Keith’s company built custom road, track, mountain and tandem frames as well as accessories.

Keith has enjoyed an outstanding career in frame building and design. He has developed several unique bicycle components that offer performance benefits for off-road cycling. Some of Keith’s contributions follow; he tested and documented the metallurgical affects of TIG welding and fillet brazing and how they relate to MTB frame durability. He then developed a prototype of the current popular gusset design to solve these problems based on his research; in 1984, Keith cut down road rims and used them on mountain bikes, demonstrating the advantages of a lightweight off-road rim; in 1987 he designed, prototyped and applied for patents on the composite fork; in 1989 he introduced a composite fork with heat treated blades that set new standards for high strength lightweight forks; in 1992 he received a patent on the “Clamp” design used on most of today’s suspension forks. In 1991 he began testing bars, stems and other components for fatigue and ultimate strength. His testing methods are becoming world standards.