Julien Absalon ruled cross country competition for the lion’s share of his 20 year career. Born in 1980 in Remiremont, France, near the German and Swiss borders, he literally grew up with the sport. Absalon was officially introduced to mountain biking by a family friend at 14 and began racing shortly after with limited success. The talented youth caught the attention of Coach Gerard Brocks, and in 1998 – his final season as a junior – Absalon introduced himself to international competition by winning almost every race he entered, including the World Championships, European Championships and the French National Championships. 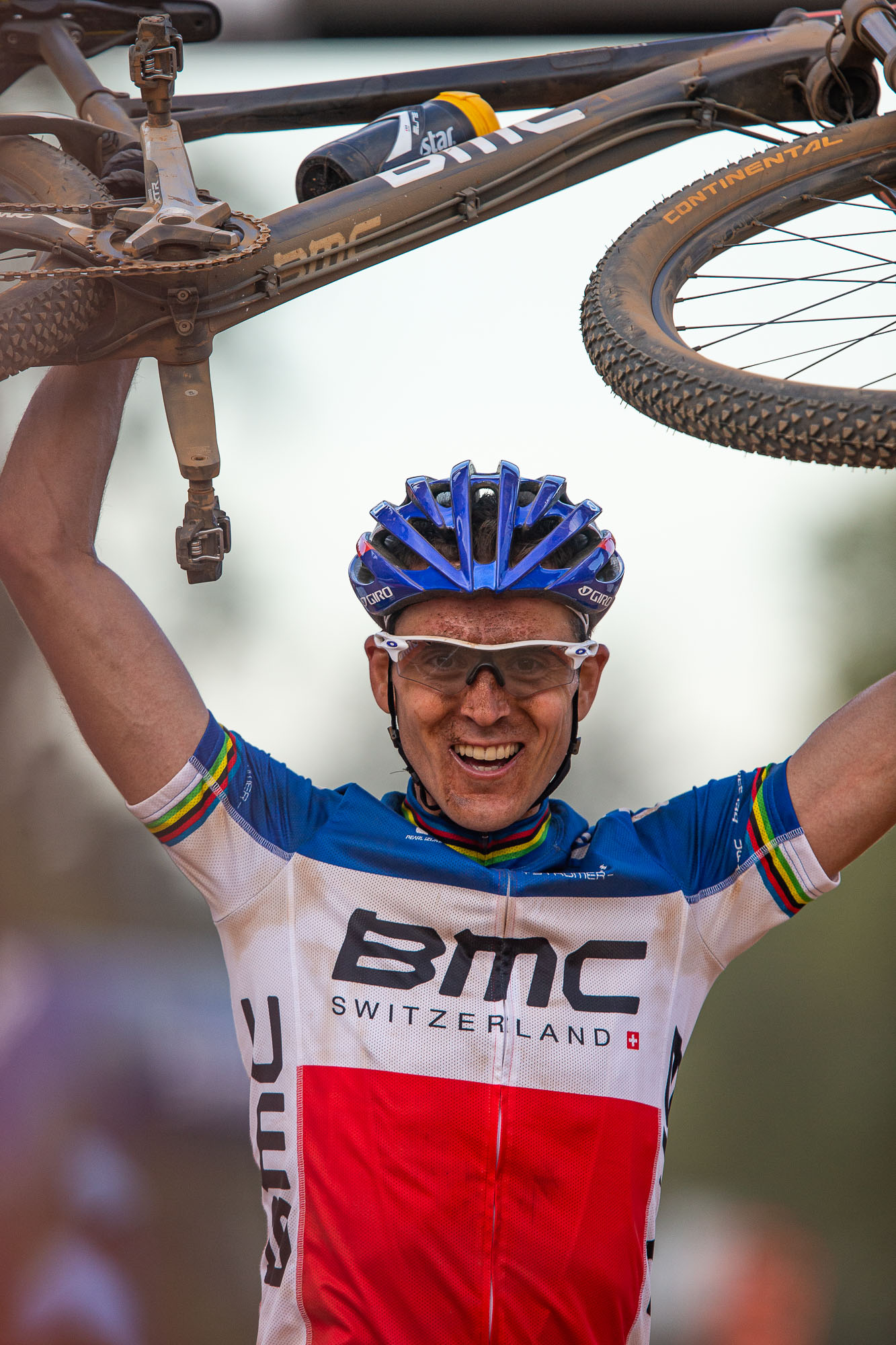 Absalon’s first victory in the elite category came at the 2001 World Cup in Durango, Colorado, where the Frenchman opted to ignore his Under-23 status and race with the big boys. He did race one event that year as a U23 – the World Championships – which he won handily. And, Absalon was just warming up.

At age 21, Absalon achieved the first of seven overall World Cup titles (2004, 2006, 2007, 2008, 2009, 2014, and 2016. He went on to win every French National Championship between 2003 and 2016 and was crowned European Champion five times. Absalon earned two Olympic gold medals back to back, first at Athens in 2004 and then at Beijing in 2008, and won the cross-country World Championships five times. Before retiring in 2018, Julien Absalon had won 33 elite World Cup races – an incredible feat by any stretch of the imagination, but numbers only tell half of Absalon’s story.

Julien’s illustrious career was punctuated by dynamic changes in bicycle technology, and in cross country venues as well. Julien said in a Pinkbike.com interview:

“Mountain biking is completely different now compared to when I got started. It used to be long climbs on long courses. Races took over two to two and a half hours. In 2008, things changed and races got shorter. I won in Athens (2004) with a time of two hours and fifteen minutes. In Beijing, I won with a time of two hours and two minutes, and Jaroslav Kulhavy won London in one hour and thirty minutes. Courses have changed dramatically; they got a lot more technical, and bikes have progressed greatly.”

Absalon began his career when XC racing bicycles had three chainrings, rim brakes, metal frames and impossibly short and steep geometry. Cross country race courses were devoid of terrain that we would consider technical today, and most of the sport’s big guns were transplants from pro road racing. In response, XC machines and race venues were further sanitized –  to the point where cross country competition seemed like a completely different sport.

Julien was cut from a different cloth. His parents knew nothing about cycling. He and his brother Remy messed around on BMX bikes and did some ski racing, but Julien didn’t discover mountain biking until his early teens. His athleticism sprung forth from the outdoor experience and challenges that came with it. After Gerard Brocks supercharged Absalon’s fitness, those early years on a BMX bike gave the young Frenchman the cushion he needed to dominate the best athletes the world had to offer from 2004 until 2008. Soon after, World Cup XC courses began to evolve into more technical venues with natural and manufactured features.

Bicycles were also evolving rapidly. Julien switched to 29 inch wheels to tackle rougher courses, which extended his winning streak until young Nino Schurter arrived on the scene. Schurter would not match Absalon’s athleticism until later, but his bike-handling skills were next level. Julien responded quickly:

“In 2013, Nino Schurter sometimes, well, actually, a lot of times, beat me in the downhills. That’s how he won three or four races, so I decided I could not continue like this. I trained hard in the winter with lots of BMX training and riding enduro bikes with my brother Remy. In 2014, it was a different story. I could push Nino to the limit on the downhills. Nino had trained hard on the uphills, however, so all of a sudden I had to work hard on the climbs. We were really, really close that year. In Hafjell, I won the World Championships title, thanks to my work with my brother.”

Epic battles ensued between the Frenchman and the Swiss, and for two seasons, elite cross country racing was a two-man show. Nino, however, was six years younger and a rising star, Julien was at his apogee. Time was not on his side, but technology was. Absalon embraced simpler, one-by drivetrains, began using a dropper seatpost, and was one of the first top-ranked cross country athletes to compete successfully on a dual-suspension bike. He admitted:

“Without Nino, I would not have continued in the way I did until now. He gave me motivation, a lot. It was interesting, and it pushed me to work harder and try to beat him. It felt so good when I managed to beat him, and I think it was the same for him. It was a huge motivator, which was important.”

It is doubtful that Schurter’s technical prowess alone could have encouraged course builders to take cross country venues to the high level of technicality they have become today, especially considering the ultra-conservative overseers of the UCI. It can be argued that Julien Absalon’s rally to match the Swiss rider, and the dynamic rivalry of Absalon vs Schurter convinced both governing bodies and competitors to continue to push forward and embrace cross country racing in a format that celebrated the rugged essence and challenges of true mountain biking.

Absalon was 34 when he won his fifth World Championship. He earned his seventh overall World Cup title in 2016 at age 36 and finished off his career with a World Cup win at the series final in Vallnord, Andorra, that season. His incredible run eventually caught up with him in the form of acute pollen allergies, compounded, say his doctors, by the volume of air his lungs ingested, pedaling at the red line for 20 years.

Absalon called it quits in 2018 and founded “Absolute Absalon” – a development team committed to bring young talent into international competition. No surprise that Coach Absalon’s prodigies are already achieving success. Best of all, this champion of champions never lost his love for mountain biking. In Julien’s words:

“What I really like about mountain biking is the endurance, intensity, and being outdoors, which is also one of the reasons I’ve never tried road racing. I love to be in the forest and just ride my bike. It’s not only about pushing hard on the pedals; I love to ride for fun.”