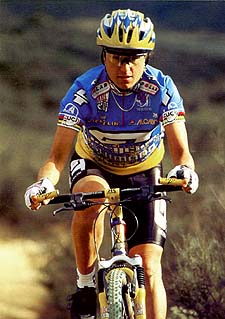 She was at the time of her career, the best female Mountain biker ever. To think that mountain biking was her fall-back career after a knee injury sidelined her ski racing endeavors

Furtado was the first official UCI Women’s World Champion. That title came at the 1990 Purgatory, Colorado event in the cross-country race.

Velo-News bestowed upon her the U.S. Women of the Year award in 1991.

Her career cycling achievements are:

Juliana was a member of the U.S. National Ski Team from 1980-1987. She also enjoys road-racing and tennis.

Juliana (“Juli”) Furtado (born April 4, 1967 in New York City) is an American mountain biker, who began her sports career in skiing. From 1980 to 1987, she was the youngest member of the U.S. National ski team.

Furtado was inducted into the Mountain Bike Hall of Fame in 1993 and the United States Bicycling Hall of Fame in 2005. Although American by birth, Furtado is of partial Portuguese ancestry.