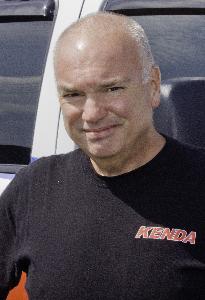 The following is to nominate Mr. Jim Wannamaker of the Kenda USA Rubber Company as a Mt. Bike Hall of Fame Inductee. This is respectively submitted by Jerry Bliton and Darren Salsbury.

Jim started road riding and locally racing in the early 1970’s on Long Island, NY. His mountain bike racing started in 1985. One of his fond memories is of the Eastern US epic “Coburn” Spring and Fall Challenges in the State College, PA, area from the mid 1980’s
through the early 1990’s. Jim’s love of bicycles led to a sales position with Bike Rack, a Fuji bicycle and parts and accessories distributor in 1981. In 1983 he went to Service Cycle Supply Company, a parts/accessories and Mongoose distributor. He advanced to being a Product Manager before leaving them in 1996.

The excitement of the sport and the friendliness of the people associated with it helped forge Jim into a knowledgeable, likeable, hard working ambassador of mountain biking. In 1997, Jim joined American Kenda Rubber in Columbus, Ohio. Soon he started showing up at mountain bike races and festivals with a small tent cover and a few tires and tubes for the support of the riders.

I first met Jim in 1998 or ’99 in a hay field on a private farm laced with single tracks in northeast OH. The place was to become known as Mickey’s Mountain and for a few years hosted the NORBA Ohio State Championship series. Jim’s knowledge of tires and his true desire to be helpful, make him a favorite of racers and event promoters. These same personal traits and talents also helped the Kenda Company develop lighter, faster, more race-worthy tires. As the sport and the tire line grew so did Jim’s display booth, the truck needed to haul it, and the number of sites all over the US where it showed up.

Currently Jim can be found at the spring Sea Otter race, the NORBA National Championship series races, Jim Thorpe, PA, Mtn. Bike weekend (12 years in a row), the Pedro’s Festival in the northeast, and a number of the 24 Hours of Adrenalin races around the country.

I have been racing in a Kenda jersey since 1999, and frequently people stop and talk to me about “that really helpful guy at the Kenda tent.” A quote in a recent Mountain Bike Action magazine sums up a wealth of stories regarding Jim: “Kenda’s tire guru Jim Wannamaker is the hardest working man in Mountain biking. If you’ve been to a 24-hour race, the Sea Otter Classic or any major mountain bike event, Jim is the guy in the Kenda tent who answered your tire questions, helped you fix a flat, or offered you a little encouragement.

Jim’s love of the sport is much more than his Kenda position. He has a personal collection of classic mountain bikes, all of which come with a much-cherished history. To know Jim is to be exposed to the best our sport has to offer. To see his tireless efforts week after week has a way of helping the rest of us keep going, too.

The east coast people don’t always identify with the early Mt. Tam riders as strongly as those from the west coast, but we do hold in high esteem Johnny T., Ned, Julie, Ruthie, and others we have repeatedly seen at races and in the publications. For many of us, Jim is one of those familiar figures whose presence helps us feel a little better about the present and future of the sport. Consequently we feel he should be nationally recognized. (Bio from Jerry Bliton)

For my background I am a member of the mountain bike community myself as a mountain bike product manager for Pacific Cycle’s Mongoose Adult Specialty division, IMBA member, and all around bike geek. I also worked with Jim at Kenda USA for a few years. The following are my most compelling reasons for endorsing this nomination.

Going the extra mile for mountain bikers in general: During the 3 1/2 years I worked with Jim, I attended approximately 5-8 mountain bike races and festivals each year. During this time I came to appreciate just what an impact Jim has had on the mountain bike community. I would have to say that at first this appreciation was reluctantly embraced. I say reluctantly
because Jim would make me get up at 6:00 AM in order to be the first ones at the race or festival and we would stay later than most other companies. I would ask aloud, “Why do we have to get up at this crazy hour to set up a booth?” or “When can we tear down? Every other company is out of here.” Jim would always answer, “There could be a rider here who needs us.”

Jim was sincerely concerned at each event that somebody might have a flat tube, worn out tire, or other need prior to their ride or race. For an outsider they might believe this was simply to make more money for Kenda but as a former employee of Kenda I can assure you that Jim had no personal financial gain from an early morning tube transaction. Kenda would have been content that Jim was simply at the event and representing the company. Whether Kenda made an extra one or two tire and tube sales would not matter….what did matter is that Jim took care of racers and festival riders; consequently people came to love him for it.

On one occasion while working for Mongoose Jim volunteered time to shuttle John Tomac to a New Jersey event. While I worked with him at Kenda I witnessed Jim figuring out ways to help up-and-coming pro and amateur athletes who were struggling financially. Anyone who has raced knows how hard it can be to come up with the money to go out and kill yourself on the race circuit.

Sometimes Jim made proposals that Kenda would support him on, such as taking a gamble on Kirk Molday when Kirk really needed help outside of his main sponsor Santa Cruz (Kirk went on to win the National Championship jerseys). Jim took similar gambles on up and comer Mary McConneloug from Team Seven Cycles as she made her relatively unsupported bid at the NORBA scene in 2003. Mary also went on to win the National Championship thanks in part to Jim’s willingness take care of Team Seven anyway he could. I’ve seen Jim pay for entry fees out of his own pocket, buy a sandwich, or share a room with a racer who was just scrambling to get by. Not many people care that much. It is truly touching for those who he has helped.

Love of riding mountain bikes: Bottom line is anyone who is nominated to the Mountain Bike Hall of Fame should love to ride. This is another area where I can testify to Jim’s passion for fat tire fun. Jim and I have mountain biked together at a number of the events we attended. Jim works so many hours and has so many commitments that he never gets to ride as much as he wants. But when he does he indulges like a man in the desert who has just found the oasis. Amazingly Jim would make 2-4 hour mountain bike rides as if he had been training for weeks prior. I’m convinced he was so energized by the fact that he was pedaling on dirt that distance and difficulty didn’t matter. My fondest memories were from rides in Fruita Colorado, Whistler British Columbia, Big Bear California, and Mammoth California. Nothing like cruising the trail with people who can appreciate the feel of knobby tires rumbling over terra firma. Jim is that kind of guy. Because of his love of riding, support of mountain bikers (both racers and festival riders), and his contribution to the bike industry, he deserves to be a Hall of Famer.Since his nomination in 2004 Jim has continued to be an active promoter of our sport. From the grass-roots local events to National and worldwide happenings, Jim’s vibrant energy is part of mountain biking’s current and changing scene. We feel this makes Jim a unique continuous thread between our history and our future and deserving of our recognition.