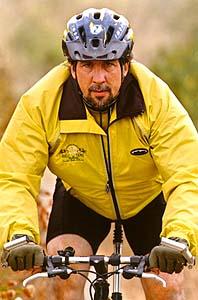 Jim Hasenauer is a Professor of Communication Studies at California State University, Northridge who has represented responsible mountain biking to land managers, politicians, and environmental and trail recreation groups for more than 11 years.

Jim was one of the founders of the Concerned Off-Road Bicyclists Association in Los Angeles in 1987, served on the CORBA Steering Committee until ’97 and is still an active CORBA volunteer. He has served on the IBMA Board of Directors since it’s founding in 1988 and served as IMBA’s president from ’91-’96. On sabbatical from CSUN in ’96-’97, Jim worked full time as IMBA’s Director of Education, working with IMBA local clubs on issue analysis and advocacy skills. Hasenauer has served as the land access representative to NORBA Board of Trustees since ’91 and on the USA Cycling Board of Directors since ’97. He represents mountain bicyclists on the California Roundtable on Recreation, Parks and Tourism and is politically active in the campaign to revitalize the Land and Water Conservation Fund that takes offshore oil revenue to buy public land. He is the co-author of a mountain bike guidebook to the Santa Monica (California) Mountains and the author of several articles in bicycling magazines.

In 1988 Hasenauer wrote CORBA’s “Position Paper #1: Philosophy of Shared Use Off Road Recreation.” This document, which is now known as “IMBA’s Multiple Use Philosophy,” has become a cornerstone of mountain bike trail advocacy around the globe.
Hasenauer argued that shared trails are best for minimizing environmental impacts and user conflicts, dispersing users, socializing new users, containing management costs and most important, for building a unified trail community. The same year, he wrote CORBA’s “Position Paper #2: Organizing a Land Access Group” that was also modified and widely distributed through IMBA. It urged riders to organize locally and work with land managers and other environmental and recreational groups. It emphasized the importance of publicity and public image in groups’ establishing legitimacy and standing in their communities. In 1988, there were fewer than 10 U.S. mountain bike trail access clubs; in ’98 there are more than 300. At the end of ’88, IMBA had about 100 members. Midway through ’98, the organization’s individual membership topped 14,000.

Hasenauer was IMBA’s president during its “great leap forward” when the Board undertook strategic planning and launched a fund raising campaign to hire an executive director and a professional staff. This professionalism helped establish IMBA as the recognized voice of responsible mountain biking and led to friendly Memoranda of Understanding with the Bureau of Land Management and the Forest Service. In 1994, Hasenauer was part of the IMBA team in a mediation with the Sierra Club that led to the agreement “that mountain biking is a legitimate form of recreation and transportation on trails, including singletrack, when and where it is practiced in an environmentally sound and socially responsible manner.” Also in ’94, he was instrumental in overturning California State Parks’ 1989 “fire roads yes/single tracks no” bicycle policy. As a result, trails throughout California, including the famous Will Rogers section of the Backbone Trial in Los Angeles, were re-opened to mountain bikes.

An articulate speaker, Hasenauer was IMBA’s first spokesman. He has taken the message of responsible mountain biking to audiences across the nation and around the world. And today Hasenauer is recognized as mountain biking’s leading worldwide advocate – a gifted speaker, writer and strategist. As the discussion about appropriate trail use continues – and it surely will – trail cyclists everywhere are lucky to have Jim as the “captain of the mountain bike debate team.”