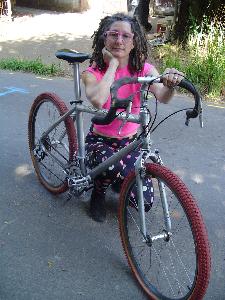 Jacquie Phelan was a commuter/bike advocate before she discovered bike racing. Her physical ability propelled her to the top of road racing (she won her first race).
Modern dance education and a college degree set her apart from her male racing colleagues.
For over five years she went unbeaten, and easiy bested 90% of the men, as the pack was unsegregated in those early years. Racing with the men improved her riding skills to the point that when she put together the WOMBATS road team for the grueling Ore-Ida stage race, she and Susan DeMattei (another HOF’er) withstood the rigors of Olympic caliber road racing.
The bicycles, (road and offroad) their componentry and the man who
built them,Charlie Cunningham, are inextricably linked to Phelan’s successes.
The 1979 Cunningham aluminum ‘ballooner” is housed in our museum. It is physical proof that at least one person thinking about bicycles in a brand new way in the brand-new sport.
Cunningham took the ‘run what you brung’ rule seriously–no spares,no outside help from teammates or spectators, etc..and he and Phelan believe that the bicycle truly is the ultimate tool in the human potential movement, and the anti-automobile philosophy.

Phelan and Cunningham were inducted together in 1988.

She wrote about cycling for twenty years (hasn’t quit) beginning at Cyclist magazine, evolving to Winning, BIKE (Life In The Fat Lane, which ran for five years every month) and French, Italian, Dutch and Swedish offroad cycling publications.
Since women weren’t racing much in the 1980’s, Jacquie tackled”marketing” fat tire riding (as opposed to racing)– without any help from the bicycle industry.
Mountain bike camps: The first ones ever produced in the world came from Jacquie, inspired by a women’s trip done with sister cyclist Casey Patterson.
Bike swaps. The first in the Bay Area were Jacquie’s own “St. Packrat’s Day Swaps” which raised money for her racing, since corporate sponsorship was largely out of the question (she rode the same bike–Otto–year in and year out). Then Jacquie gave the reins to Marilyn Price, who morphed into the Trips For Kids Swap.
JP’s biggest impact was with her network, the Women’s Mountain Bike & Tea Society, aka WOMBATS. In the 1990’s the club had four to five hundred members nationwide, with chapters in CT, AK, AZ, MT, MI, MA,NM and TX.
Jacquie was the keynote speaker at the charter meeting of IMBA.
She is a co-founder of NORBA (the National Off-road Bicycle Association)
In 2001 she develooped and taught teachers the skills drills for the
first-ever Safe Routes To Schools program
She writes a blog that Velonews cited as the blog-of-the-week in December 2007, bringing daily readership to 6,800 per day.
For 25 years she has produced “Santa Cruisin’ for the Bruised”–a benefit ride for Women’s Crisis Support of Santa Cruz, the first Saturday of every December.
She recently took up ultradistance racing and was 8th place at the 11-
day Garmin Transportugal 2004–out of 20 men.
Then the siren call of Single Speed–specifially the Scots interpretation of same–lured her out on a borrowed Rock Lobster beginning in 2005, and she hasn’t missed a World Championship since.

The only thing that eludes her is a job.

And probably stuff that I have forgotten but will tack on…I might as well mention that I routinely put OTHERS up for awards: Got Marilyn Price the Girl Scouts Daisy Award, as well as lots of honors both locally and nationally (since she doesn’t have the emboucheur for hornblowing, oddly enough).

Pssst! This bio is a pigment of Jacquie’s imagination. We are just letting this unabashed “ham” think she’s a “hollow famer”.