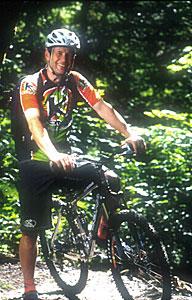 Jacob HeilbronJacob “Jake the Snake” as he has been known, since his Canadian Cyclo-Cross Championship, has been and continues to be an integral part of the Canadian and international bicycle industry. Since introducing the first mountain bikes (Ritchey) to Canada in 1980 from his retail bike shop in Vancouver, West Point Bicycles, and founding Rocky Mountain Bicycles in 1981, Jake’s industry presence has been large.

In 1988 Jake founded Kona Mountain Bikes with Dan
Gerhard and current Hall of Famer Joe Murray. This is not to say in the years between founding Rocky Mountain and Kona that Jake was idle. He was
Co-founder of the Canadian Off-Road Bicycle Association, founded the oldest continously run mountain bike race in Canada (Vedder Mountain Classic) and organized the 1st (unofficial) Canadian MTB Championships in 1984. Hall of Famers Joe Murray, Max Jones, Dave Wiens had their racing days with Kona.
Kona’s commitment to racing is continuing on into the new millenium with racers like Geoff Kabush, Ann Grande, Scott Beaumont, Tracy Mosely & a Clump
of Out of Bounds riders taking extreme riding to a new level.

Since 1988, Jake along with Dan Gerhard and the Kona
crew, has taken Kona to one of the top 10 bicycle companies in the USA and blurred many an international border along the way. Currently Kona Mountain Bikes are sold in 30 countries around the world. Jacob and Kona have also been a big supporters of industry advocacy, starting with the Buck-A-Bike program and continuing with the IMBA/Kona Interbike Bowling tournament, and
a permanent on staff advocacy coordinator.