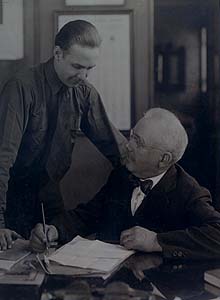 SCHWINN made their contributions to mountain biking long before the mountain bike movement of the past 25 years. Ignaz began producing his bicycles in 1895 and worked at the company he founded, Arnold, Schwinn in Chicago, until his death in 1948. Frank W., son of Ignaz, worked at Schwinn from 1918 until his death in 1963. While they never envisioned a bicycle designed especially for riding off-road, they made vital contributions to the sport of mountain biking. Both Ignaz and Frank stuck to a philosophy of building rugged, durable bikes combined with timeless design qualities. That philosophy far outlived both of these men – a testimony to its power.

IGNAZ SCHWINN was born in the little town of Hardheim, province of Baden, Germany. The second of seven children, his father died when he was eleven and Ignaz was sent to vocational school. An intense interest in the high-wheeled “ordinary” bicycle of his day, led him from town to town working on bicycles and bicycle parts whenever he found the opportunity. In time, he came to work in the machine shop of Heinrich Kleyer, who soon employed him as a designer & works manager for the Kleyer factory. Kleyer manufactured some of the first “safety” bicycles in Germany. It was called “safe” because the rider could put their feet on the ground while seated as opposed to the high wheeled “ordinary”. About 1889, Ignaz helped plan and supervise the constructing and equipping of a new factory for Kleyer, which grew to become the great “Alder Works”.

In 1891, at age 31, Ignaz immigrated to Chicago. In 1894, he and businessman, Adolf Arnold founded Arnold, Schwinn & Company. Ignaz designed the Schwinn-Built bicycle and the tools to make it. He then set up a bicycle factory. In 1908, Schwinn bought Arnold out and enlarged the factory to meet the increasing demands for his Schwinn-Built bikes. Ignaz Schwinn had natural talent for mechanics. He brought to America thoroughness in detail and technique of mechanical fabrication that came as close to realization of perfection in plans and ideals as the human can realize.

For over fifty years a new American safety bicycle was pioneered, engineered and improved to the high place of the standards set by the Schwinn Built Bicycle. Ignaz was also involved in pioneer development of the automobile and he loved the motorcycle. After founding the Excelsior Motor Manufacturing Company in 1913,
he created the Schwinn De Luxe Henderson and Excelsior motorcycles.

FRANK SCHWINN was a compulsive designer and draftsman, sketching ideas whenever they came to him. Frank started out as an apprentice designer and engineer just after World War 1. He attended engineering school a few nights a week, but his day job at the Excelsior factory gave him too much practical experience to keep up his interest in obtaining a college degree.

Ignaz bet heavily on the stock market and lost almost everything when the market crashed in 1929. If that wasn’t enough, the motorcycle business suffered through a marketplace saving its available dollars for cars. Ignaz closed down the motorcycle business in 1930. Schwinn’s other asset, the bicycle business, had shrunk from 100,000 high-priced models in 1900, to 30,000 discounted models thirty years later.

After the financial crash of the 1920’s, Frank W., now 35, took a few trusted employees and moved over to the bicycle business. Frank brought with him all the design energy and styling that had been developed in the motorcycle business for over two decades. He began producing bikes that looked more like motorcycles than traditional bikes, like the “Aerocycle”. Many believe the Schwinn Bikes of the 30’s and 40’s to be the direct ancestors of the present day mountain bike. Hall of Famer, Joe Breeze, used the 1937 Schwinn Excelsior’s geometry in designing his first mountain bike frames in 1977.

According to Breeze, one of Schwinn’s biggest contributions to cycling was their wire-bead, double-tube “balloon” tire, created in 1933. Frank Schwinn said, “ The single tube type tire was just a glorified piece of endless garden hose with a valve in it. Punctures were just irreparable.” When Schwinn closed down their motorcycle operation they focused on modernizing the American bike and the tire was the first component they worked on. Frank reduced the wheel diameter from 28” to 26” and fattened the tire width from 1 1/8” to 2 1/8”. Little did the Schwinns know, they gave mountain biking its tire. The balloon tire popularized by the Schwinns had the same wheel diameter, cross-sectional diameter and carcass construction as the tires used by the Marin County pioneers in the 1970’s. The fat tire gives mountain bikes their comfortable, stable and sure-footed ride.

When the World Wars broke out, the Schwinn factory devoted its resources to an all-out effort for the production of war materials for the U.S. Armed Forces. Schwinn was awarded the Army and Navy “E” for excellence for their war production performance during the 2nd World War.