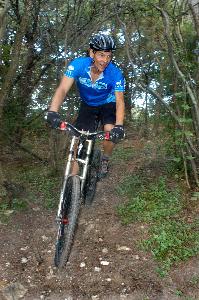 Hill Abell has been riding mountain bikes since 1984 and found so much joy doing it that in 1985 he bought Bicycle Sport Shop, a mountain bike specialty shop in Austin, TX so he could share his passion for mountain biking with everyone. In 1988 he recognized that the local mountain bike community needed to take a role in educating mountain bikers on trail etiquette and our responsibility for building and maintaining the regions trails and helped found the Austin Ridge Riders, Austin’s IMBA affiliated club. Hill also became active in promoting mountain bike races around the state and could be found flogging the trails from the piney woods of east Texas to the deserts of west Texas. He’s still involved in the Mas o’ Menos 100 in the Big Bend region, a designated NORBA classic.

In 1993 Hill was nominated to the Board of Directors of the International Mountain Bicycling Association by Linda DuPriest of Specialized Bicycles, the industry’s first paid cycling advocate. Hill has been Chairman of the Board since 2002. Hill has had the opportunity to work with and learn from many of the very best advocates for mountain bike access in his 14 years on the IMBA board, and has been with IMBA through it’s growth from a fledgling volunteer based organization to the internationally recognized model for effective advocacy that it is today.

One of the early supporters of the Texas Bicycle Coalition, he provided office space in his main store for the TBC for it’s first 4 years, and is still a major supporter of the TBC’s efforts. A founding member of the Texas Mountain Bike Racing Association, he helped institute the phenomenally successful PayDirt Program that has resulted in the contribution of tens of thousands of volunteer hours to build and maintain trails across Texas. Bicycle Sport Shop also sponsors the PayDirt Program and has helped promote the program and contributes piles of sweet shwag for its year end awards every year.

As a member of the Texas Trails Advisory Board from 1999 to 2006, Hill helped distribute Texas’s share of the Recreational Trails Grant funding and advocated for new mountain bike trail projects state-wide. He’s also been a member of a citizen led initiative to build trails on Water Quality Protection Lands that will demonstrate the mountain bike community’s ability to build low-impact, sustainable trails on environmentally sensitive lands.