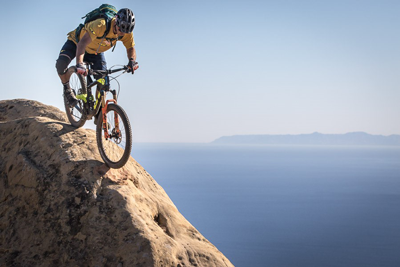 Hans “No Way” Rey aka Hansjörg was born 4 June 1966 in Kenzingen/Germany. Rey is a pioneer in mountain bike trials and extreme mountain biking also known as Freeride / “Freeriding“. Rey began riding in the late 70s. Since 1987, he has ridden exclusively on GT bikes. In 1999 he was inducted to the Mountain Bike Hall of Fame.

Hans Rey, born and raised in Emmendingen, Germany; is a citizen of Switzerland and since 2008 also a USA citizen. He lives in Laguna Beach California with his wife Carmen.

Over the years he has won a large number of bike trials riding championships, including German, Swiss and USA National Champion, NORBA World Champ, Winner of the UCI World Champs, and Bike Trial Union Vice World Champ, Bronze Medal MTB Slalom Worlds, and X Games Silver Medal winner in the Trials in 1995 when the X Games were known as the ESPN Extreme Games; but since 1997 has retired from competitive sports to explore the world on his mountain bike adventures.

He is the only permanent member of the “Hans Rey Adventure Team”, a quest to explore the world using his mountain bike talent always in search of something historical or mysterious. These trips are often filmed for television and the stories have been published in magazines all over the world. He has traveled to over 70 countries and has been featured on approx. 400 magazine covers. He has done a first descent on bikes of Mount Kenya, traversed the Sinai Desert in the footsteps of Moses, created the No Way Transalp route, searched for headhunters in Borneo, ridden the Inca Trail to Machu Picchu, ridden the Roop Kund trek in the Indian Himalayas, Bike Safari in Botswana, circumnavigation of Mount Kilimanjaro, Rubicon Trail in California, searched for the mysterious Dropa tribe in China, Wadi Rum Desert in Jordan, Cuba’s Sierra Maestra Mountains, Annapurna Trek in Nepal, Copper Canyon Mexico, 5 volcanos in 5 days in Ecuador, Haute Route in France/Switzerland and many more glaciers, volcanos and treks. In 2016 Rey climbed and rode Mount Kenya and Mount Kilimanjaro back to back. In 2017 Rey started his “Urban Adventure” series with his “TransAngeles” project, a 5 day ride across Los Angeles. 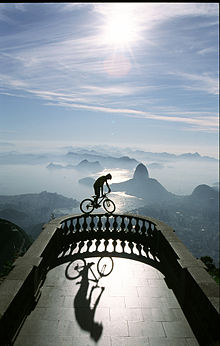 Rey made a name for himself with a number of publicity stunts on this bike, like the infamous photo in gridlock traffic on the 405 Freeway near Los Angeles on top of a car, bungy jumps with his bike, his wild ride on ropes down a 14 story skyscraper in New Zealand, his legendary ride along the 600 ft. high ledge at the Cliffs of Moher and his bike dance on the volcano in Hawaii surrounded by hot lava on the edge of a boiling ocean.

Hans was one of the first to produce action videos of his trials biking and extreme biking skills, including his own VHS series from 1992 to 1996: “Hans No Way Rey”, “Level Vibes”, Monkey See – Monkey Do” and “Big Five”. He has also starred in movies like Tread (1994), and made guest appearances and stunt work on the TV series Pacific Blue (1995-1998). He was part of the closing ceremony of the 1996 Olympic Games. Appeared in Willy Bogner Fire, Ice & Dynamite and White Magic films.

In 2005 Hans Rey founded Wheels4Life, a non-profit charity that provides bicycles to people in Developing Countries in need of transportation. More info can be found wheels4life.org. By 2017 over 11,000 bicycles have been given to students, healthcare workers and farmers in 32 different countries. Hans and his wife Carmen run the charity voluntarily along with supporter from around the world.

Hans Rey is also an honorary board member and long time supporter of IMBA the International Mountain Bicycling Association. He has been a big supporter of purpose-built biking trails, especially Flow Trails In 2008 he coined the term Flow Country Trail together with trail guru Diddie Schneider. Flow Country Trails is a certain kind of flow trail that is never steep, extreme or dangerous. It can be ridden by all skill levels and on any kind of mountain bike.

In recent years Rey is engaging in talks and motivational keynote speeches at all kinds of events. He is still a full time professional mountain biker at the age of 51.

Sponsors: Hans Rey’s sponsors as of 2018 include GT Bicycles  (his partnership since 1987 is one of the longest standing sponsor relationships in the entire cycling, action sports and outdoor industry), AdidasTERREX since 1993, Shimano since 1988 (since 2017 Rey is a Shimano eBike ambassador), LUK Automotive Systems since 1992-2016, Fox Shox, Crank Brothers components, Vittoria Tires, Carosello 3000 Livigno Bike Resort, Clif Bar, SQ-Lab saddles, Stans No Tubes wheels, iXS protection, Adidas Eyewear, Deuter backpacks. He was also sponsored by Swatch as part of the SwatchProTeam for 19 years.