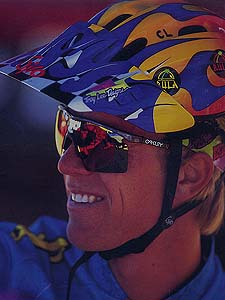 Greg Herbold is the Will Rodgers of mountain biking. He always maintains his witty sense of humor, is colorful and ready to give encouragement or assistance to anyone in need.

Due to his impressive racing talents, Greg was used as a test rider for many manufacturers of state-of-the-art mountain biking products. Shimano enlisted him from 1988 to 1991 as their head test rider. Greg also worked with Rockshox, Answer/Manitou, Gripshift, Ringle and Giro Helmets.

Greg has been in the limelight of media exposure. Starting in 1992, Greg began appearing in videos, commercials, sports segments and finally the full-length movie “Tread”. During that time, Mr. Herbold could also be found in every major mountain bike publication around the world.

Greg even has his very own fan club, Club H-Ball. Now that’s saying something!