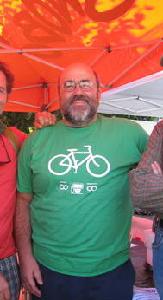 Gary has been involved with bicycles since crashing into the garage in 1961 after his grandfather launched him down the driveway shouting, “training wheels are for sissies!” Despite this early setback, he became involved in the bicycle industry as an adult, spending nearly 25 years as a frame builder and industry consultant.

In Boston in the early 1980s, frame builder Chris Chance teamed up with this former Aerosmith roadie Gary Helfrich. (Yes, I know this is a different kind of roadie than we are all accustomed to.) Originally Chris was building lugged frames but with Gary they started experimenting with building steel mountain and road bike frames using TIG welding and Fat City Cycles was born.During the early years of mountain biking, most of the bikes available were being designed by West Coasters for their trail conditions. With the Fat Chance and Yo Eddy frames, Fat City catered to East Coast trail demands like tight, twisty rock and root-infested singletrack. Known for his off-the-wall personality, Helfrich single-handedly built over 2500 bikes while working for Fat Chance Bikes.

After his stint as a welder with Chance at Fat City Cycles, Helfrich founded Merlin Metalworks. Helfrich is considered the founder of the titanium bike industry being the first to design and build a titanium mountain bike. Titanium is a difficult metal to work with and Gary had so many firsts with this material.

After leaving Merlin, he moved to Sonoma County where he worked as a custom frame builder and consultant for companies such as Trek, Serrotta, Santana, and Ibis Cycles.

In 2000, Gary sold his company and returned to college to earn a degree in environmental studies and planning, with a concentration in transportation planning. After graduation, he took a position with Sonoma County Permit and Resource Management Department’s comprehensive planning division. During his tenure at PRMD, Gary was responsible for developing the County’s 2010 Bicycle and Pedestrian Plan and revising the County’s General Plan to be compliant with the Complete Streets Act.