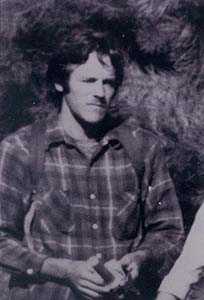 Research and development can boost any sport. In Marin County, there was one rider who could perform extensive component research in a relatively short time. At well over 6 feet and 200 pounds, Fred Wolf fit the bill.

red took to fat tires in 1973. From his Fairfax home he would set out daily to test the best and destroy the rest. Someone would ask, ”Do you think a Sturmey-Archer 3-speed would work on one of these bikes?” Chances were, they would have their answer by the next day. A quick run up Mt. Tamalpais, Loma Alta or Pine Mountain was all it took. Of course Fred got good at hiking too!

Fred also had prior knowledge of two-wheeled hot spots, having ridden his motorcycle over much of the far northern reaches of Mt. Tamalpais. This led him and his buddies to discover in 1974, the fun of riding fat tire bikes down what would later be dubbed “Repack.” Repack was the first organized and timed mountain bike race.

The excitement created by “Repack” played an important role in bringing the fat tire scene to the attention of America and the world.

Wolf took up fat-tire-bike riding in 1973. At well over 6 feet and 200 pounds, he served in a useful research and development capacity: his muscled frame could quickly ferret out bike parts unworthy for what would later become known as a mountain bike. Charlie Kelly and Wolf discovered the Repack course. When Repack racing began in 1976, Fred ferried racers to Azalea Hill with his one-ton flatbed truck, his dog Junior on the roof of the cab. Wolf brought fun to any ride, whether he was flying down a new hill or keying out a new wildflower.

Wolf was born in 1945 and lived in Mill Valley. He graduated from Tamalpais High School before moving to Fairfax and starting his family. He is predeceased by his wife Emma and survived by his children Zuzu, Rose and Gus.