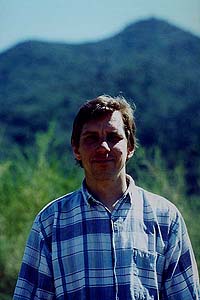 On the Mountain Biking scene from the early 1970’s, Erik Koski has seen and helped shape the change from the heavy 1930’s single-speed balloon-tire bikes to high tech lightweight space age materials and full suspension.

Products such as the Koski DuraTrac Competition Fork, All Terrain Bicycles, Inc., The Cove Bicycle Shop, The Trailmaster– All these names can be traced back to one source – Erik Koski.

Starting in the 1970’s the Cove Bicycle Shop supplied 1930-50s used balloon-tire frames, and the Koski’s specialized welding and brazing on these relics, combined with cantilever brakes and miscellaneous parts to produce functional hybrid mountain bikes.

The Koski DuraTrac Fork was very popular, living up to the “bulletproof” reputation that Koski’s designs earned. A Marin masterpiece, the Trailmaster for instance, was THE bike for hard core Marin County cyclists because it was so hard to break.

Erik was part of the earliest group of pioneering Mountain Bike innovators including Joe Breeze, Gary Fisher and Charlie Kelly when the demand for imported parts began to show itself with packages from Japan arriving in Marin County. His interest in getting the product to the people spawned a mail order catalog business supplying Breezers, Pro Cruisers, Cook Bros, Champion, Laguna, and of course the Trailmaster among others.

Erik originally furnished the Hall of Fame with much detailed information, and included a warm note of appreciation for his friends and customers who have provided him with much inspiration over the years.