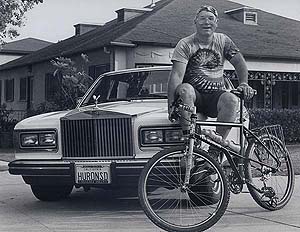 A bicyclist most of his life, and a mountain biker since the early 1980s, Al Farrell got involved with NORBA in 1983, and has since become the only honorary life member of that organization.

Labeled the “patron saint of mountain biking”, Al has supported and worked on all aspects of the sport, particularly trail access. He is a life member of many trail access groups including IMBA, CORBA, LIMB, BTC-Marin, BTC-East Bay, Share, L.A. Wombats.

Al’s main goal in mountain biking is to encourage others to follow in his footsteps by supporting all aspects of the sport, racing, trail riding and community betterment.  He has helped to underwrite many races and purses over the last decade and sought to bring trials to a level where it will receive industry support.

One of Al’s most noteworthy contributions is the support and organization of programs to introduce inner-city youth and children to the sport, such as through the Hollywood YMCA, Trips for Kids, Bicycles Trails Council-Marin and a similar program with BTC-East Bay. By donating the first 10 bikes to the Trips for Kids BTC-Marin, Al provided the necessary equipment to get the program started.

“My experience in mountain biking has been such a joy, that I’m trying to see that it is shared with others,” he says.

His mountain bike exploits have taken him all over Europe, the far east, the headwaters of the Amazon, the remote regions of the Arctic, the volcanoes of Central America, Australia, New Zealand, Canada and the South Seas islands.

More recently, he has been instrumental in supporting the Mountain Bike Hall of Fame in its move from Crested Butte, CO to Fairfax, CA and he continues to be one of our strongest donors.

He is originally Huron, S.D, and he holds a Doctor of Humane Letters (Hon.) degree from Huron University. He is a municipal broker with Dean Witter in Beverly Hills, Calif., and is married to Shirley Armfield. They have two children, Patricia and Richard.

The Mountain Bike Hall of Fame salutes you Dr. Farrell!