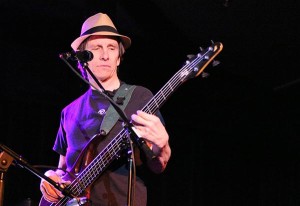 I would like to nominate Dave Garoutte to the Mountain Bike Hall of Fame.

Dave is a unique individual with many years of involvement in several different aspects of the mountain bike. He not only holds a legitimate claim to mtn. biking pioneer status, but has also made major contributions to the sport through his work in the industry and his involvement in mtn. bike advocacy. I am nominating him primarily for the Pioneer category. However I see it as reasonable to nominate him for the Industry and Advocacy categories as well. Wider recognition of Dave’s contributions is long past due and to be considered as a triple header nominee is a fair and reasonable way to acknowledge the depth and breadth of his involvement in the sport of Mountain Biking.

Dave Garoutte grew up in Marin County and being a lifelong two-wheeled fanatic found himself bombing the trails of Marin side by side with most if not all of those Marin based personalities commonly credited with being founders of the sport, most of whom are current Hall of Fame inductees.

Along with Dave’s love of two-wheeled speed (he’s also had long involvement in motorcycle racing) his passion for mechanical design, metal fabrication and machining found Dave spending plenty of his time repairing and modifying the bikes he rode as well as designing and making doo-dads and gadgetry to facilitate a bike that worked and held up better.

Amongst those Marin pioneers it became common knowledge that Dave was the go-to guy for getting things made and made right. In 1978 Dave opened DKG, a metal fabrication and machine shop. One of his first customers was the Koski Brothers who had a dream of producing a production Mtn. Bike frame. The result of that paring is the now famous Koski Trailmaster, one of the very first production Mtn. Bike frames. This frame included features such as tig-welding (very rare on high end bikes back then) and a hooded style drop-out (these were horizontal dropout, but were the progenitor of the widely recognized “Breezer” dropout which is essentially a vertical version of this original DKG design). Both of these features became widely accepted industry standards as time went on.

Dave’s never ending quest for better quality, function and design coupled with his “early adopter” attitude towards technology made him the go-to guy for many of us industry folk when we wanted our designs produced accurately and properly. When Charlie Cunningham needed the best welding possible for his famous aluminum frames, Dave was the guy he trusted. When Mert Lawill wanted help refining his innovative bicycle suspension designs….who’d he call…it wasn’t Ghostbusters…When Dave made the big jump into the (then) new world of CNC machining his dance card got very full and his customer list quickly resembled a who’s who of the mountain biking world. Because of his involvement in and love of cycling Dave afforded many of us much earlier access to CNC machining than we otherwise would have had. Most of the machine shops back them with CNC technology were barely willing to even talk to us bike nerds unless we needed huge quantities of parts.

There have been many designs attributed to other big names that would never have seen the light of day without one or all of the following: Dave’s involvement, Dave’s refinement, Dave’s full on design work. Dave has an uncanny knack to figure out ways to make even the best designs better. Well known names like: Cunningham, Koski, Lawill, Fisher, WTB, Salsa, Fat City, Serotta, Moots, Calfee, Kent Ericksen and many, many others have counted/count on Dave for the best of the best when it comes to refining and producing high quality machined goods.

Another of Dave’s “early adopter” innovations was the use of true monocoque construction in the beautiful bicycle trials frames he made in 1987 and ‘88. These made quite the splash when they were rolled out for Mtn. Bike events. He made very few of these frames but they drew a lot of attention and without a doubt inspired lots of young gear heads and engineers who later brought this technology to the mainstream bike market. Dave’s engineering and design talents have been a major inspiration to many of us who’ve come to know him over the years. Even the most talented engineers and designers stand to benefit from Dave’s involvement in their projects. He’s that good! As a former industry insider…I considered myself very lucky to work with him on numerous occasions. As a current industry outsider, I consider myself very lucky to call him my friend. The inspiration continues!

Lastly…early on Dave recognized the need for some sort of local organization aimed at protecting cyclists off-road riding rights. With that in mind, he founded (1987, I believe) and became the first president (and secretary…and treasurer, etc.) of the Bicycle Trails Council of Marin….one of the very first off road cycling advocacy organizations in the world.

Dave has been such an important asset and been so hugely helpful and inspirational to so many of us pioneers and non-pioneers in the industry for so long that I feel he richly deserves a place in the annals of our sport.

Dave has been active in Mtn. biking and the Mtn. Bike industry from the mid ‘70s to present. He continues to produce and innovate for numerous bicycle industry customers.

I sincerely hope that this nomination for Dave Garoutte is accepted.