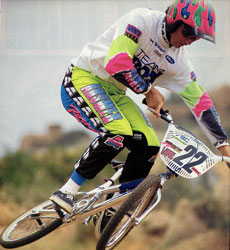 It sounds cliché. In fact, it sounds so cliché to almost come across as sounding trite… but Dave Cullinan gave his heart to the sport of mountain biking. And not just once.

It all started in the late ’80s when the BMX rider burst onto the dual slalom and downhill racing scene with a level of confidence, style, and determination that immediately put him on the race-winning radar. 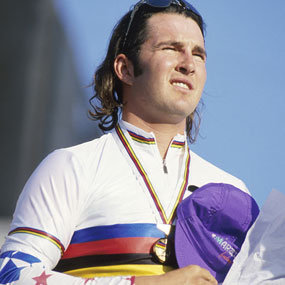 With a growing tally of NORBA National wins under his belt, it was Dave’s unthinkable performance at the 1992 World Championships in Bromont, Canada that his showstopping style hit a new high. As one racer after another rode up and over a massive ramp jump, “Cully” instead leaped over the structure to go on and win the rainbow jersey.

Unfortunately, on a downhill practice run at the 1993 World Championships in Metabief, France, Dave suffered an injury that would have consequential effects not just on his professional career, but his life. Unbeknownst to him at the time, he’d torn his aorta and it wasn’t until months later when the injury caught up with him resulting in an emergency run to the hospital for open-heart surgery.

Despite bouncing back and forth from the races to the hospital to undergo a series of additional heart surgeries, “Cully” never lost his passion and enthusiasm for the sport. He continued racing and winning.

Race historians, as well as World Champions like Leigh Donovan and Brian Lopes, credit Cullinan as the pioneer rider who not only blazed the trail for so many other BMX riders to follow, but also for the role he played in evolving much of the suspension, pedal, and drivetrain technology enjoyed by so many mountain bikers today.