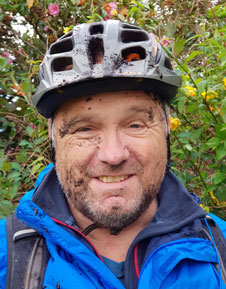 Dafydd (dah-fvid) Davis is a Welsh climber, fell runner and avid mountain biker whose impact in the design and creation of UK mountain bike trail systems cannot be overstated. Over the last twenty years he has utilized his well rounded background as an outdoorsman to not just establish trails, but to create the worlds first national development strategy for mountain bike trails and tourism.
Davis’ uniquely holistic approach in developing strategies for sustainable planning and construction methods has been so successful that it has set standards that are now in use worldwide. Rather than simply building trails, he has put an emphasis on reducing environmental and visual impacts, while minimizing maintenance and management needs and reducing on-trail conflict by considering the needs of all stakeholders.

His first trail at Coed-y-Brenin saw visits rise from just over 10,000 to more than 150,000 a year and became a model for the strategy that saw Wales establish itself as a mountain biking destination. The trail at Coed-y-Brenin also became the basis of the ‘Trail Centre’ model which is now widely established throughout the UK.
Dafydd’s clear robust methodologies, transparent standards and wide knowledge of land management & environmental issues alongside his knowledge of what mountain bikers want has resulted in a global demand for his work, which now reaches beyond the UK into the Czech Republic, Poland, Canada, Australia, Japan and Israel.
In recognition for his contribution to the development of forest recreation and tourism Dafydd was awarded an MBE in the Queens Birthday Honours List in 2004.