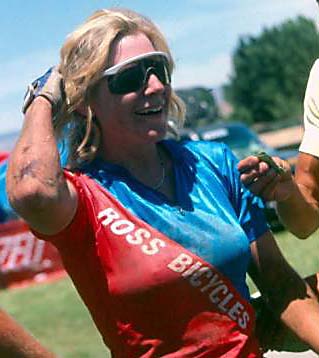 In High school I competed in tennis, swimming, and basketball. One of my most memorable trophies was the “gutter hugger award” bestowed on me by my swim team my first year of competition. I learned that I could rise out of the gutter. The following year I received the “Most Improved Player” award. It became my motto, to “never give up.”

In the spring and summer of 1984 I road raced on the national circuit along with Connie Carpenter and Rebecca Twigg, the 1984 Olympic gold and silver medalists. I finished 10th in the National Road Race that year, and had plans for great accomplishments and feats for the 1985 season. However, in the fall of 1984 I was introduced to mountain biking and fell in love with the machines in Crested Butte, CO. It was there that I was picked up by the “Ross Indians” team to promote their mountain bikes for the next two years.

The first year I expected to win everything, given my road racing history, but I won nothing. The next season I finally won my first big mountain bike race. It was the “Whiskeytown Downhill”, which had overall elevation loss, but was a brutal cross-country race, as I recall. In the season’s next race, the Rockhopper, I only earned 2nd place. Determined to win and to dispel the notion that my first race win was a fluke, I vowed to win the next race of the season, “The Sierra 7500″, named for the 7,500 feet of elevation changes from the desert floor of Bishop to the 13,000′ mountain tops of the Buttermilk mountains of the Eastern Sierras.

I began the 50 mile race fast and hard. It was a drought year and there was lots of sand. The first sandy wash, which was about 1 mile into the 50 mile race, was too difficult for me to cross and ride out of, so I dismounted my bike and ran with it to the top of the hill. It was there, that I ran along my bike and jumped onto it, cyclocross style, only the binding bolt broke and my seat came off. After watching many riders pass me by, as I stood there sad and stunned, I decided to go for a training ride without my seat. BTW, since I never moved my seat post up or down, it was stuck inside the seat tube, so I just rode with it that way.

The initial motive to continue the ride was to burn off some of the extra fuel I stored up from carbo loading the night before. When I reached my adapted goal to just ride the short race loop, I had the top female rider, Jacquie Phelan, in my sights. Instead of quitting, I chased her down, and passed her. Then she commented, ” I knew you wouldn’t quit.” , and she passed me again. We traded the lead several times, before I finally broke away from her fairly close to the summit. From there to the finish I out rode her and was never beaten by her again, except when I’d ridden the wrong course, made some other navigational mistake, or had a mechanical.

My mountain bike racing career lasted for another 8 years after that event, and I went on to win a multitude of national and international races, but it was really that ride that changed my life. I bared my sole and discovered so much passion within me. And in a few subsequent years, my peers honored me by inducting me into the Mountain Bike Hall of Fame. I am truly grateful for that gutter hugger award in high school, because it proved to me time and again when I had a setback, that I could rise out of the gutter, continue to fight, improve and be honored for it.