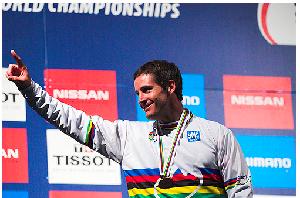 Mountain biking is a brotherhood, a fraternity of sorts for millions of thrill-seekers all over the world. I challenge you to set forth an inquiry among these fellow brothers, in any of the seven continents, and I will guarantee you that the name Lopes is synonymous with American Mountain Bike racing. I can also guarantee you that this is not by chance, but instead a result of over 15 years of racing, training and clearly living the Mountain Bike lifestyle.

Since his professional racing debut back in 1993, Brian has been a constant presence on race podiums worldwide. With over 25 World Cup wins, four World Championship titles, nine National Champion titles in both DH and Dual Slalom, Brian hold the most World Cup “wins” out of any male racer to date. This combined with the recognition that he has earned beyond the cycling industry:

Brian has whole-heartedly been one of Mountain Biking’s most prominent ambassador’s and while the above notable accomplishments compound into an impressive career resume indeed. The most significant quality that Brian poses can’t be quantified, that is his passion for mountain biking. He is a mountain biker first and his titles/wins are a culmination of his passion and hard work.
So armed with the above information and the truest of beliefs that Brian is a sincere embodiment of mountain biking and that the name Lopes will continue to be synonymous with American Mountain Biking for years to come.