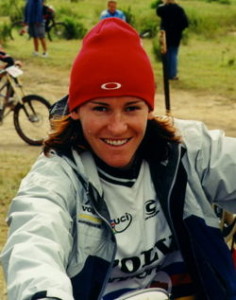 Anne-Caroline Chausson (born October 8, 1977 in Dijon, France) is a French Olympic gold medalist in BMX, and downhill time trial and cross-country mass start, dual, and four-cross mountain bicycle racer, best known for having won fifteen Union Cycliste Internationale senior world championship rainbow jerseys, fourteen continental championships, and seven Mountain Bike World Cup championships, and, in part in view of which, for having been a nominee for the 2003 Laureus World Sports Awards Alternative Sportsperson of the Year.

Chausson capitalized on her previously successful BMX racing career that ended in 1993 and enjoyed quick success early in her mountain bike racing career, winning the 1993, 1994, and 1995 downhill junior world championship gold medals before matriculating to the senior circuit, at which she would win titles in eight consecutive years. Chausson has also been regarded to be the worlds greatest downhiller of all time. In 1996, when she finished second behind American Missy Giove for the overall World Cup title, Chausson captured the world title, defeating silver medallist American Leigh Donovan and Giove, who would claim the bronze. Chausson would once more finish second to Giove in the 1997 World Cup overall standings but easily claimed that year’s world championship, defeating Swiss Marielle Saner and Finn Katja Repo.

In 2000, Chausson expanded her competitive repertoire, participating in the duals event, in which riders compete on parallel courses, composed of identical obstacles—primarily jumps and berms—in a single-elimination tournament, during the third season in which it was contested at the World Cup level, after which the 2000 iteration of the world championships featured the event for the first time; Chausson captured each crown, ahead each time of American Tara Llanes. Chausson once more participated in the duals event in 2001, failing to win a medal in the World Cup, won by Donovan, but winning the world championship once more, garnering the second and last duals title, this over Australian Katrina Miller, the World Cup silver medallist.

The four-cross BMX racing-inspired event, in which four cyclists ride on the same course betwixt gates, such that only the top finisher advances to a subsequent round, was chosen in 2001 by the National Off-Road Bicycle Association, the sports authority governing mountain biking for USA Cycling, to replace the duals and duals-slalom events and replaced the duals event in 2002 in both the World Cup and world championships competitions; Chausson nevertheless won the four-cross and downhill titles in each, ahead of countrymate Sabrina Jonnier in each, save for in the four-cross event at the world championships, where she topped Miller.

In 2007 she resumed BMX racing in pursuit of an Olympic medal in BMX racing which was making its debut in the 2008 Summer Olympic Games. This effort was successful when she won the Gold Medal in Women’s BMX. Since the Women’s Final Event, the Medal Round, was staged before the Men’s, she became the very first person to win a Gold medal-and of course a medal of any kind-in that sport.