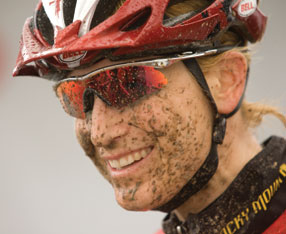 Alison Sydor is one of the most well-known names in mountain biking today. She has firmly established herself as a legend in the sport with an impressive resume full of victories. She has won three World Championship titles, the Silver Medal at the 1996 Olympics in Atlanta, three UCI World Cup titles and seventeen World Cup wins, and more NORBA races than you can count. In 1996 she won the International Cyclist of the Year from Velo News beating out 5 Time Tour de France winner Miguel Indurain. Top this off with 12 World Championship Medals in her career.

Sydor was extremely successful on the road, but with her love for the mountains and trails, she realized her passion was for off-road racing. She began her mountain bike racing career in 1991 and took first place at the World Cup Cross-Country round in Chateu D’Oex, Switzerland.
The first time Alison won the Mountain Bike World Championships in 1994 was a major turning point for her. Prior to the win, Alison wondered if she would ever be talented enough to achieve such major victories in Mountain Biking. She says that when it sunk in that she had won such a huge title and achieved a lifelong personal dream, the accomplishment gave her confidence in her racing as well as in her outside life.

Through her success, she has become a role model for mountain-bikers, outdoor enthusiasts, and young athletes. She says she takes her inspiration from her teammates and training partners. “I draw from their energy, motivation and tremendous work ethic as they train to pursue their own dreams, and that is something that inspires me.” She is very popular at races, taking time to talk to fans and being especially available for the media. She believes part of her job is to promote mountain bike racing and its image to better the sport overall.