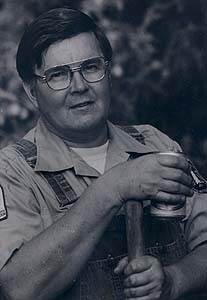 I am a resident of Pasadena, California. I teach welding at Pasadena City College. I’ve spent a lift time hiking in the local San Gabriel Mountains. In 1985, at the age of 38, I bought my first mountain bike.

I was never a fast rider; my heart would palpitate like a Kawasaki—the serenity of the forest made it all worthwhile. This daily ride became an important part of my life.

I had only enjoyed the quiet for a few months, when all hell broke loose. The push was on to ban bicycles from the USFS trails, the Toll Road, and a local park. Newspaper articles started to pour on the heat. These people were angry about the speeding down hill bikers and trail damage. These anti-bicycle people had the clout to get media attention and the ear of local politicians.

About this time, I met USFS ranger George Geer of the Angeles National Forest, Arroyo Seco District. The message from George was:

“Listen, Guy, You’ve got a PROBLEM! These bikers are out of control; they’re tearing up the trails, frightening hikers and equestrians. People are REALLY pissed off. If YOU don’t do something to control these guys, ALL bicyclists will be BANNED. It’s YOUR PROBLEM, YOU’VE GOT TO DO SOMETHING ABOUT IT.”

I started bike riding in the mountains to get away from the stress of city life, and now, I was right back in the middle of it. I repeated George’s speech to every cyclist I met on the Toll Road, soon the process was a group effort. The anti-bike Eaton Canyon Association claimed 200 member. We called ourselves the Mt. Wilson Bicycling Association with 10 active people. We were strictly a peer-pressure-educational group, no rides, no newsletter, no dues, no t-shirts.

Our early efforts to educate cyclists were slowly paying off. Bikers were slowing down on the Toll Road. Public officials & land managers recognized our efforts and offered support. We were permitted a yearly pancake breakfast at Henninger Flats, we were invited to become USFS volunteers, encouraged to attend trail building school, and allowed to adopt and maintain trails. I am grateful for the support of USFS Ranger George Geer & county forester Carl Fisher.

November, 1986, our first Pancake breakfast at Henninger Flats. This is our only fundraiser of the year. Last year, November 1992, over 800 cyclists attended our breakfast fundraiser. I am deeply in dept to the Mtn. Bike industry for their generous support of this event.

June 1987, I served on the 2nd USFS Conflict Resolution Group.

Today- with every mountain bike sold, our efforts to educate continue. Ours has been a group effort, I thank the hundreds of cyclists that have joined the Mt. Wilson Bicycling Association over the years, to build and patrol trails.