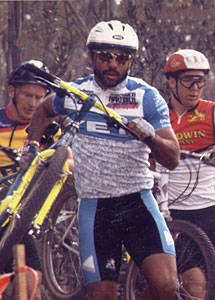 Charlie Litsky: Litsky was an absolute freak for cycling as well as the man behind the Tomac PR machine in the early ’90s. How internationally renowned was the always-hyper, Brooklyn-born bike freak? Valentino Campagnolo once said that dealing with Charlie was like dealing with “a Puerto Rican with his ass on fire!”

Former racer Daryl Price remembered Charlie most for his knack of inclusion. ” In my first year racing mountain bikes,” recalls Price, ” he made me feel like a longtime NORBA player. Whether it was at a BMX or track race, or even on the strand in Redondo Beach, he always wanted everyone to feel the love of the cycling community.”

Yeti Cycles founder and Hall of Fame inductee, John Parker added, ” I’ll never forget him throwing schwag down to the spectators from an elevated platform at the ’90 Worlds. He was a ringleader who could work any crowd into a frenzy. He was the right guy at the right time fro what he was doing.”

At the age of 31, Charlie suffered a heart attack after competing in a track race, and his funeral, held just days before the ’93 Big Bear opener, attracted bike industry players from around the world. Charlie “Leapin” Litsky was greatly loved and remains dearly missed.