Another mysterious wood-frame bike from the Perry Kaminski vault…  Part of our recent 20-bike acquisition from the Kaminski Family, mostly from the 19th century.

Wood-frame bikes are seeing a resurgence today thanks to the resilient nature of fibrous composites. The 1890s Golden Age saw plenty of bamboo and hickory bikes. This one is probably of hickory, second-growth for superior shock resistance.

As the maker is yet unknown, I’ve anointed this Unknown as Jerome, at least until I learn otherwise. While our “Catalina,” another Kaminski woody, is in a class of one (that I know of), Jerome is in a class of at least two. There’s a very similar bike on eBay right now, asking price $2395.

So the search for Jerome’s roots continues…

Since last month’s newsletter, Jerome’s true identity was revealed thanks to The Wheelmen forum, member Jeff Kidder coming up with the goods. Jerome was born in 1896 and comes from the Huseby Cycle Co. of Milwaukee, Wisconsin. Once we learned of Jerome’s parents I was able to find more about Huseby, a company indicative of the heady days of the “Golden Age” of cycling, when the fun and freedom of bicycling took the world by storm. At the apogee of the craze in 1896, twenty-five-year-old Norwegian immigrant George Huseby was able to finance his company to the tune of $200,000 (over $6 million today). Seventy-five Huseby employees labored out of multiple addresses in Milwaukee, including the four-story building below. They built 75 Husebys a day. Like many Golden Age start-ups, this one fell victim to the bicycle bust that followed the craze, or the simple fact that Huseby bikes were not quite the new sliced bread touted. They were done by the end of 1896.

BTW, I’ve been in touch with the current owners of the Huseby building. Today it’s known as the Artisan. It’s configured as apartments, and in the lobby is a tribute to its history including Huseby Cycles and a later tenant: Sperry, makers of the Candy Chicken Dinner!  ~Joe 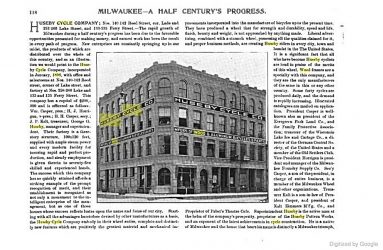 Huseby HQ back in the day. 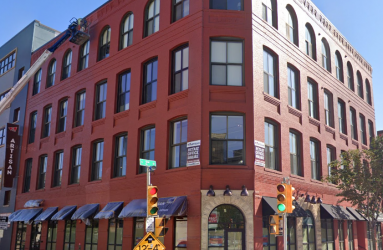 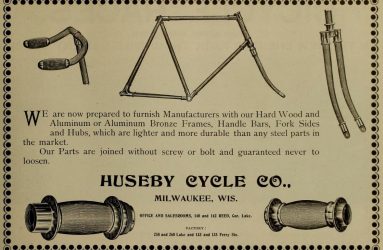 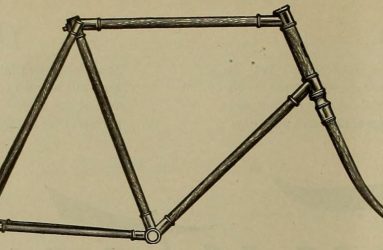 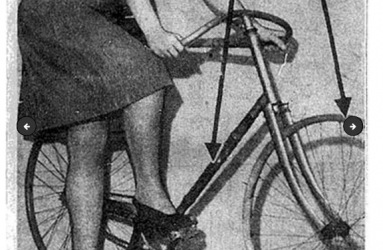 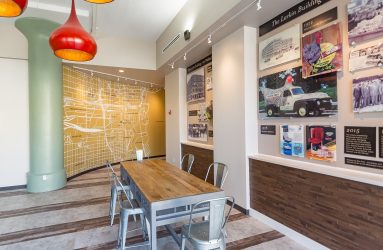 Huseby HQ today has been renamed The Artisan and converted into apartments. Here is a shot of the lobby.

Jerome at his new home at the Marin Museum of Bicycling 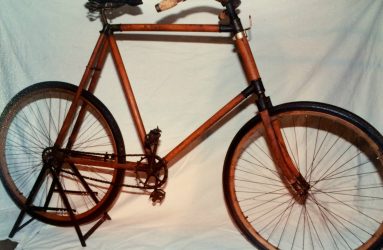 c1898 WOOD-frame bike with brass lugs, and wood fork and bars of same construction. This bike is part of the Kaminski Collection. We received the bike in pieces in several boxes.. 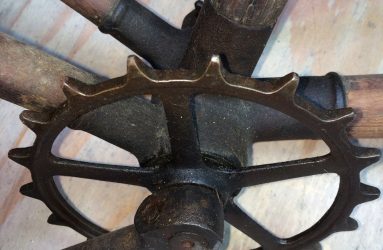 An 18-tooth chainring. The rear wheel has an 11-tooth cog, giving a total gear of a paltry 46 inches (18/11 x 28" wheel). Was this the maker's insurance policy? No speedy catastrophic failures here... 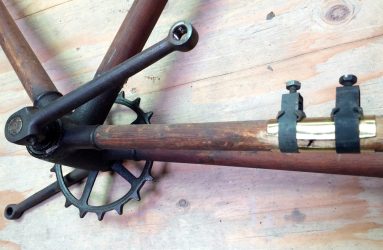 A splinted left chain stay (which doesn't appear to be healing). But it's hardly the only structural concern. 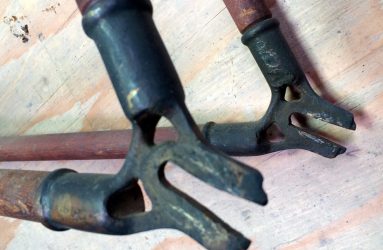 The wood dowels ("stays") are stuffed into brass castings and pinned together. Reinforcing rings gird against splitting. 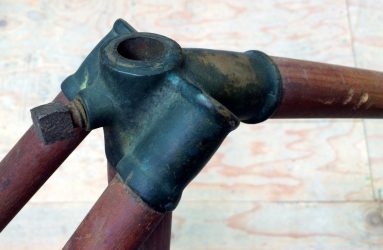 The maker must of had a good line on brass, no shortage of it here at the seat lug. Note the primal seat post securing. 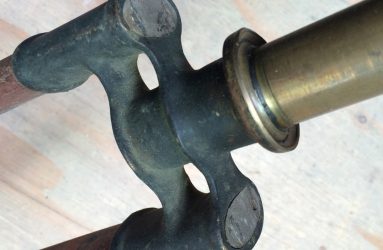 It's nice that this BRASS fork crown example still survives, but it's likely a rarity. And that one-inch diameter BRASS steering tube! Scary! Note the axe wedges to secure the fork blades. 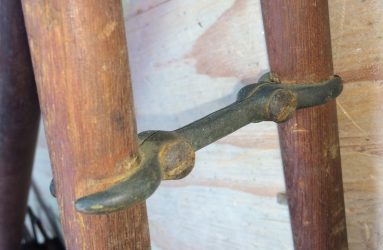 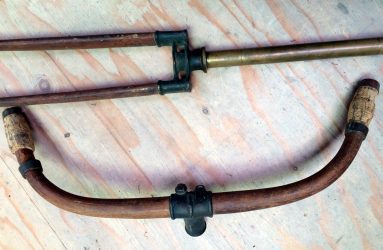