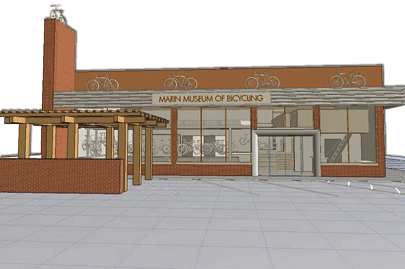 The Marin Museum of Bicycling is a nonprofit organization that educates the public and expands appreciation of bicycling through displays and programs on bicycle history and culture.
As a bicycle cultural center, we promote bicycling as a way of life for fun, fitness, sustainability and sport.

To expand the public’s appreciation of the bicycle, the most efficient form of human transport ever devised.

The Marin Museum of Bicycling is a bicycle history museum and cultural center being created in Fairfax, California. The museum will be the new home of the Mountain Bike Hall of Fame, which has been located in Crested Butte, Colorado since 1988. The museum will also exhibit selected items from the Igler Collection of “Golden Age” bicycles, including key examples in the development of the bicycle from the 1860s to the turn of the 20th century. Special exhibits will be rotated through the year.
Bicycle advocates and mountain bike pioneers Joe Breeze, Otis Guy and Marc Vendetti are the moving force behind the Marin Museum of Bicycling. The Museum will be located in a 3,000-square-foot facility in downtown Fairfax. The Grand Opening is planned for mid-2014.
We will feature bicycle-oriented events including lectures, movies, and live TV coverage of cycling events. Our small screening room will seat up to 12, and our main hall will seat up to 90 people and serve as a meeting place for bicycle clubs and enthusiasts and for lectures and films.
The Mountain Bike Hall of Fame will be a central focus of the Museum and will be expanded to show more bikes, more history, more inductees — more Fame! Museum and Hall of Fame Memberships will be available and are a great way to support our efforts and be a part of our success. Members will receive discounted access to our exhibits and events.