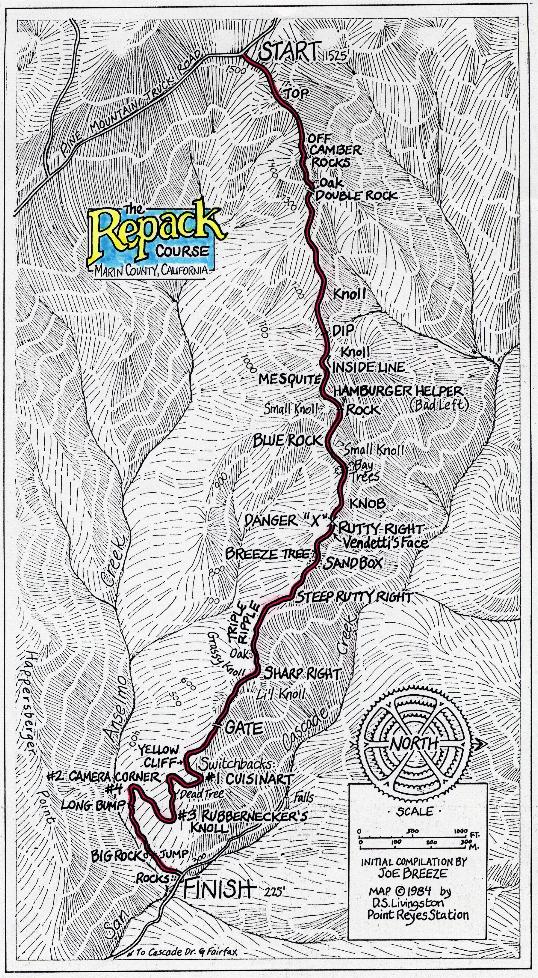 It started innocuously enough. A motorcyclist turned bikie discovered the old dirt road west of Fairfax, Marin County, in the early ‘70s. He and his buddies would ride or push their 1930s or ‘40s ballooners to the top of the ridge for the downhill thrill. The road plummeted 1300 feet in less than 2.1 miles. On the twisting, sometimes precipitous decent, the bikes’ antiquated hub coaster brakes would get so hot that the grease would vaporize. After a run or two, the hub had to be repacked with new grease (thus the term “Repack”).

Repack Road had been a popular downhill for a couple or three years, but whenever you get a bunch of competitive types together, someone is going to claim they are the fastest. And eventually people will want proof. With Alan Bonds’ encouragement, Fred Wolf and Charlie Kelly founded Repack, the race. They decided on a time-trial format, got a Navy chronometer and an alarm clock set a date and spread the word locally.

On October 21, 1976, ten local riders showed up to test their mettle. When the dust had cleared Alan Bonds was declared the victor. He was the only one who hadn’t crashed.

The race became a magnet for riders from all around the Mt Tamalpais area. So eager were they to compare handling skills on the treacherous course, the first nine Repack races were held on the average of one a week.

Racers and spectators would meet in downtown Fairfax, CA. Many would load their bikes into the back of waiting trucks for a lift up a paved road to the 1000-foot level. From there they road their bikes on dirt the last 2 miles, climbing the remaining 500 feet.

The start line was on an open ridge on the east face of Pine Mountain, with expansive views of Mt. Tam, Marin and San Francisco Bay. In this inspiring setting, riders chatted about the past week’s or month’s new bike discoveries and developments.

Riders were sent off individually at two-minute intervals. To build suspense, the fastest riders from previous races would go last. As the pack at the top dwindled, a hush would fall over the remaining riders waiting for their start.

I for one, with about ten minutes to go, would seek solitude to visualize the courses’ many turns and adjust the pressure of my old UniRoyal Knobby tires to suit the conditions. I had fitted my 45-pound Schwinn Excelsior with 26 x 7 (vintage one-inch pitch) gearing.

Once on the start line Charlie Kelly, timer in hand, would hold my rear wheel until the last second. I’d lunge forward, driving all my weight on the pedals to produce enough momentum to help me muscle the tall gear over a slight rise 5o yards out. From there it was all downhill and speed.

The road is littered with in-line gullies, blind and off-camber turns, and the occasional cluster of head-size rocks. Knowing the road beyond each turn was key. I had made mental notes of landmarks such as geology, flora, and past mistakes. Among the latter were Danger “X” and Breeze Tree (whose moniker wasn’t earned as harshly as Vendetti’s Face).

The course rolls quickly down the ridge to the steep final face, which has a series of four switchbacks. These steep sharp turns, especially Camera Corner, would be lined with spectators. Then it’s a final straightaway; another blind turn, across the finish line, and into a big Franz Klammer slide. 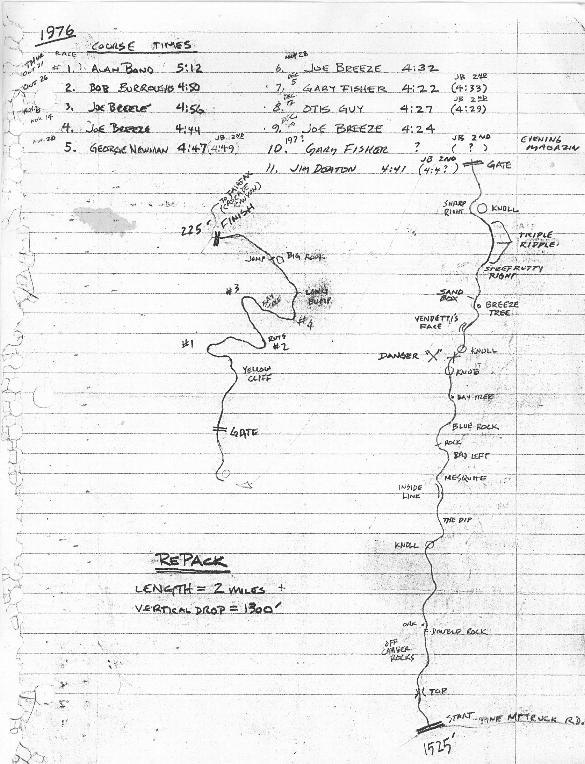 While race times were calculated, the throng would exchange stories of the day’s near misses, and chat more about the bikes.

The rain begins to fall on the seeds; a sport, mountain biking, is born. Repack was a crucial event in the development of mountain biking. Here for the first time, Mt Tamalpais Bikers were all drawn together on a regular basis to share their stories and share their ideas about the new bike. This cross-pollination of ideas spurred the bike’s evolution and solidified the sport.

Racing generated new excitement and an event to focus on. Racer and reporter Owen Mulholland spread the word out of Marin with his story “California bikies are mountainside surfing, in VeloNews, February 10, 1978.” Then in January 1979, San Francisco’s KPIX-TV shot a segment for its “Evening Magazine” show, (can be seen at the Mountain Bike Hall of Fame’s Museum in Crested Butte), which aired around the country on CBS affiliates. In 1979, Charlie Kelly published a story in Outside Magazine. The word was out.

In all there were 24 Repack Races. Twenty-two of them were held from 1976 to 1979, mostly in the fall as the road-race season wound down.

There were also annual Klunker Awards Banquets to honor the year’s Repack winners. Among the winners were Gary Fisher, who posted the fastest time at 4:22. Joe Breeze had the second fastest time at 4:24 and the most wins, 10. Wende Cragg was the fastest woman with a 5:27. Otis Guy was awarded Fastest Fireman at 4:25. Alan Bonds’ dog Ariel got the prize for Fastest Dog. 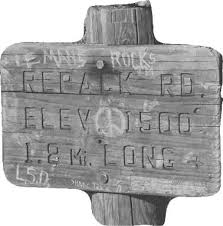 After 1979, Repack’s organizers and racers focused increasingly on their own businesses, many of which focused on the new bikes. Mountain bikes were becoming lighter and more versatile. Emphasis shifted from downhill to cross-country exploration.

The last two Repack races, in 1983 and 1984, were a bit for old time’s sake. Scheduled in conjunction with the fledging NORBA National race circuit, they gave riders from outside the Bay Area a crack at the legendary course. Some of the sport’s first Pro riders raced in those final two Repacks.

After the 1984 race, Marin County land and water managers made it clear that Repack, the race, could be no more. There was little resistance; the race’s time had come and gone.

A list of Repack participants reads like a Who’s Who of mountain bike innovators and racers in California. Besides the oft named Marin County riders, there were Tom Ritchey (1979), Mike Sinyard (1983), Brian Skinner, Dan Hanebrink, Mike Jordan, David Wonderly, Joe Sloup, Jim Harlow, Steve Boehmke and Jimmy Deaton (winner in ‘83 and ‘84). Jammin’ Jimmy went on to a successful Pro career. Fairfax-born downhill ace Myles Rockwell was only 12 years old in 1984.

Twenty years almost to the day of the first Repack race mountain biking was included in the 1996 Olympic Games in Atlanta. That is the icing on the cake for this now worldwide sport.