Check Out: A Billy Savage Short Film on John Finley Scott! (Make sure to watch both the Finley 1 and Finley 2 clips) 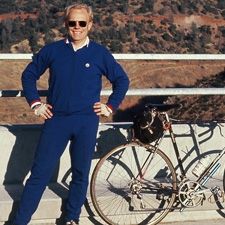 What do you want your epitaph to be? My mom once suggested “shot in the back by a jealous husband at age 102” might be best for me. That’s probably what John Finley Scott, 72, had in mind too. Irreverent, wisecracking, and not given to excess sentiment, he would have liked that.

But it didn’t work out that way. Instead, he went missing on June 3, 2006 and stayed that way. For the intensely social Scott, a retired University of California at Davis sociology professor, “went missing” means something wrong. After a few days, family and friends knew something was mighty suspicious, and as the months have dragged on, we know he’s gone. None of his bikes or cars is missing. His house didn’t look broken into. He’s just. . . not there.

There was some suspicious activity on Scott’s bank account both immediately before and after he went missing. Blood found inside his house is a bad sign. Police identified a “person of interest” in the case, but I’m now learning firsthand what cold comfort that is. I’ve never been close friends with an apparent murder victim before. The person of interest cashed a check that Scott had reported stolen, and is now incarcerated on other charges. Scott had earlier hired that person, Charles Kevin Cunningham, to do some work around Scott’s house. Capt. Larry Cecchettini of the Yolo County Sheriff’s Department told me that the investigation continues, and that real crime labs have much longer backlogs than you see on the TV show CSI. I wish Cecchettini every success.

So (1) who was John Finley Scott, and (2) why did I wait until he was gone before ever mentioning his name in print? (1) He was one of the best influences on cycling in the last half century, and (2) I screwed up. 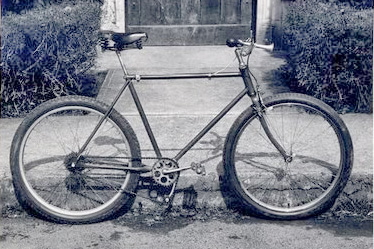 Let’s start in 1953. That year, John Finley Scott made the world’s first known mountain bike. It had multiple gears and knobby tires. He called it his “woodsie.” Fast forward two decades. In the early 1970s, Scott was one of the key people who persuaded the California legislature to write mostly-sensible traffic law, calling the bicycle a vehicle instead of demanding that it stay on the sidewalk and come to a stop at every driveway intersection. It is difficult to overstate the importance of this work. Other state legislatures and the National Uniform Vehicle Code often follow California’s lead on traffic matters. California was on the cusp of putting us all up on the sidewalk and slowing us down to walking speed. Other states might have followed. But fortunately, that didn’t happen.

Scott tag-teamed the well known activist John Forester on this work. Of that joint effort, Forester freely said, “He was much more adept at handling bureaucracies than I was.” Forester even accepted editing suggestions from Scott, who would tell Forester, “You write very much like an Englishman, and you should say this in a smoother manner.” Where Forester was blunt, Scott had the ability to turn on his bon-homie professor charm (which, by the way, could disappear rather abruptly if he felt like it). It worked. California state law, while not perfect, avoided leading this nation into an abyss of getting us all out of the way of motor cars.

In some elements of the law, Scott later explained, the law was convoluted and wordy by design: it went that way so the best possible outcome for cyclists would gain a majority vote. Had the wording been simpler, it would have been more anti-cyclist. It takes a keen student of human egos and committee-wordsmithing behavior to recognize when something that is on the surface obfuscatory is the best possible outcome. But that was Scott.

Scott’s next major influence on cycling was in the mid-1970s, when he lent $10,000 in business capital to a young bike racer named Gary Fisher. The money would be used to buy mountain bike frames (handbuilt by Tom Ritchey) and components from all over the globe. Then Fisher could sell completed mountain bikes for around $2,000 each. Once again, it is difficult to overstate Scott’s influence. The mountain bikes we ride today might never have happened without him.

How can I say this when the mountain bike was already invented? Simple: someone had to prove that it could be marketed as well as invented. If you go back in time to 1977, the conventional wisdom was that this is fun, but it’s not a product—it’s just another weird California thingie. When Joe Breeze sold a “production run” of 10 Breezer mountain bikes, many people thought he had saturated the market. Scott’s venture capital allowed Fisher to sell hundreds of bikes, and that was sufficient quantity to get the attention of Specialized and Univega. By late 1982, those two companies were offering production mountain bikes. But I doubt that Specialized and Univega would have committed to the project if the only precedent was Breeze’s 10 bikes. 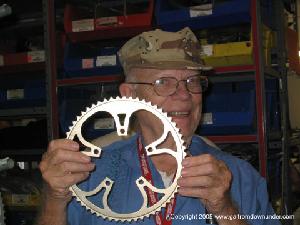 At the University of California, Scott was a provocative professor, always urging his students to test their assumptions. He taught a class in the sociology of transportation, and the insights from that class are hard to deny, even as they clash with the sometimes-sloppy assumptions of some of today’s bicycle advocacy. “He always promoted the notion that bicycles should be treated like cars,” said Susan Borschel, a former student and self-professed fan of Scott, an avid cyclist and now a Washington, DC area lawyer. “We shouldn’t have special treatment just because we’re on bicycles. If we acted like vehicles and were treated that way, we’d be safer. I thought that was very different and cutting edge. “At the time, this was a very new concept. Everyone wanted to be treated special back then.”

Scott roundly insisted that the “hegemony of the automobile,” as he called it, was inevitable. Indeed, even in bicycle facility havens like the Netherlands, the percentage of trips taken by bicycle is dropping and auto use is growing. Scott noted that bicycle use was even falling in Davis, since today’s college students are less inclined to cycle and more inclined to ride the bus than the students of a few decades ago. He insisted that bicycle commuting was unlikely to grow significantly in any upwardly mobile society, particularly the U.S. Scott regularly pointed out that cars are “efficient status symbols,” and that their use as status symbols would not be discarded by most people.

But at the same time, he observed something we have all noted: weekend recreational cycling is alive and well. What made Scott both delightful and irritating was his provocative irreverence. Whether it was giving a prize to the first finisher without any Campagnolo components in the Davis Double Century or telling his sorority students that the primary purpose of sororities was to provide a good hunting ground for future husbands, he wasn’t afraid to step on toes. He ridiculed people who bashed American culture and routinely praised Wal Mart.

On e-mail discussion groups he considered it his duty to flush out car-haters, since he believed their agenda was harmful to vehicular cyclists. In so doing, he locked horns with some good people and offended them gratuitously. I wish he hadn’t done that.

Then there was the bus. 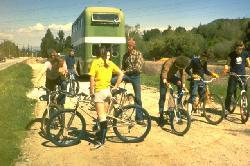 Scott owned a London double-decker bus, and he would often haul a busload of hippie bike racers to their races, sometimes with interesting results. Joe Breeze, five-time tandem winner of the Davis Double Century (with tandem partner Otis Guy) and now producer/director of Breezer bicycles, recalled the day, some decades ago, when the bus took off without Scott. “We were at a rest stop, we got in, someone else was driving, and we took off,” Breeze said. “No one realized Scott wasn’t in the bus. “And then a police car came up to us with its lights flashing, and pulled us over. Scott was in the police car.”

Oh, what I would give to see him show up in a police car now. Twice since he disappeared, I’ve dreamed that he showed up at my house on his bike. “Scott was too dismissive of the potential of bicycling for transportation, but he was very spot on about some of the false assumptions people make,” said John S. Allen, author of Street Smarts and a nationally known bicycling policy analyst. “I miss the guy. He’s someone I could discuss things with, and no one else is as much fun. And the way he went was just terrible. Unexpected, violent, undeserved, a weird fluke of just apparently allowing the wrong person in his life.”

The story John Finley Scott, by John Schubert, was originally published in the January 2007 issue of Adventure Cyclist magazine, the member publication of the Adventure Cycling Association. For more information, visit: www.adventurecycling.org.

CONVICTED FELON IS FOUND GUILTY OF MURDER
(excerpts from an article the Dec. 1st Issue of BRAIN written by Jason Norman)

Cunningham, 48, was found guilty of first-degree murder and grand theft and faces a sentence of 32 years to life.

Even though Scott’s body was never found, his disappearance along with a bloody crime scene at his home convinced jurors he had been killed.

There wasn’t much forensic evidence connecting Cunningham to Scott’s murder, but the deputy district attorney said there was motive. Scott, 72, found Cunningham was forging his signature on checks and confronted him. Scott had hired Cunningham to trim trees.

A sad day for cycling, a legend amongst us has passed on. For 46 years Tony Tom and his "A Bicycle Odyssey" shop in Sausalito, California offered cycling fanatics the finest from around the world.

Join us on December 12th for a memorial ride around Paradise Drive in Tiburon. Meet at Dunphy Park across from A Bicycle Odyssey and be ready to leave at 10:00am. A celebration of Tony's life will follow afterwards back at the park. There's a new gofundme campaign to care for his mom Ruby and if you would like to contribute the link will appear after you sign up below.

Sign up for more info as it becomes available.