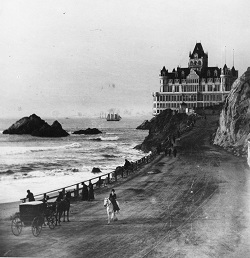 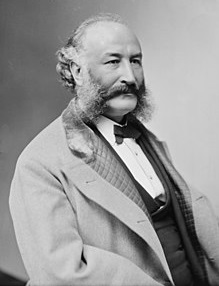 As a kid in the 1960s I remember frequenting a museum in San Francisco out at the Cliff House, near Seal Rocks. It had a large collection of bicycles, among other wheeled wonders, and large music boxes, and curios from all over the world, even a few Egyptian mummies and, well, you name it. This was the Cliff House Gift Shop, billed as the “World’s Largest Gift Store,” sprawling through many buildings in the area between the Cliff House and Sutro Baths. It was tourist central, before Fisherman’s Wharf caught on. George Whitney Sr., who bought the Cliff House in 1937, was kind of a P. T. Barnum of the West. He had a knack for parting nickels from customers—he knew what they wanted. He collected appealing antiques the world over and displayed them for the world to see. Bicycles made the grade, including bicycles that Comstock baron Adolph Sutro had collected in his lifetime. 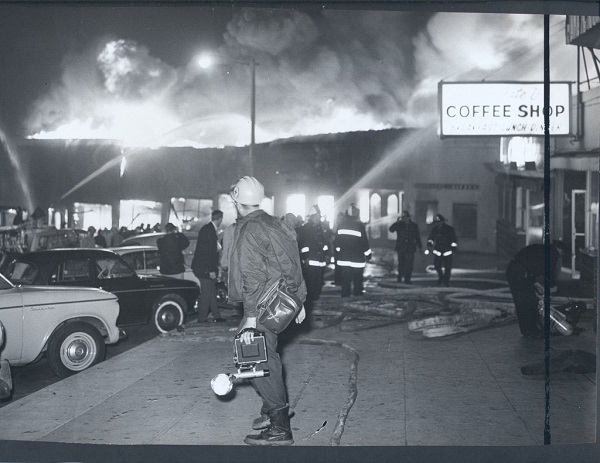 Whitney’s museum burned in a huge fire in 1963. Gone in an instant, vaporized, were centuries of history. I was heartbroken to read of its demise in the next morning’s Chronicle. Sutro Baths burned in 1966. 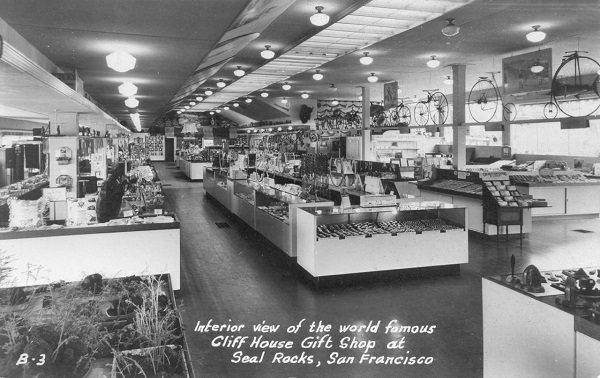 In years since, I’ve wondered what exactly the bikes were that I had seen there as a kid. Recently John Martini, a local historian, sent me a link to http://opensfhistory.org with some Sutro Baths/Cliff House photos. 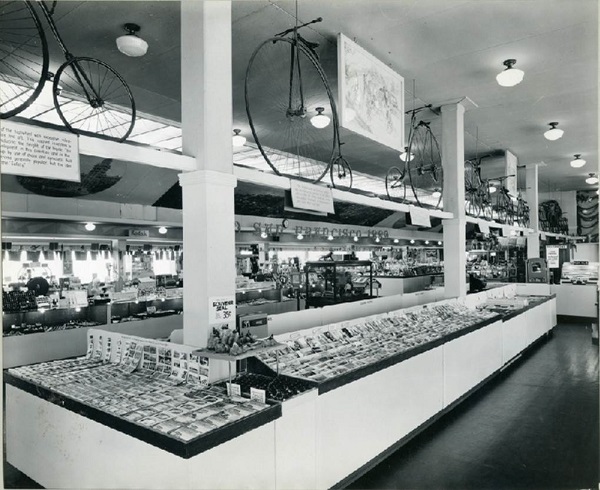 When I inquired about the bikes, he shared with me the first photos I’ve seen of the collection. Some cool bikes— though some of the best are too distant to identify. Anyway, all up in smoke.

The bikes were displayed above the floor and all around the perimeter of the buildings, interspersed among the other antiquities. 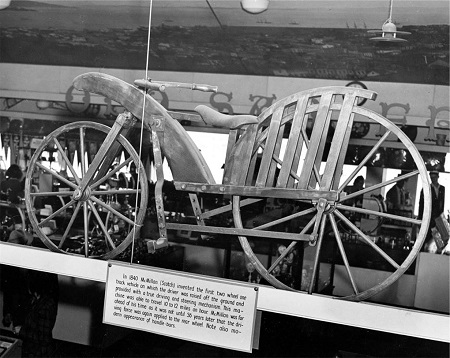 This “1840 McMillan” (sic) is a replica of an 1860s Scottish-made assumption of the bike in question, this one perhaps made locally.

Kirkpatrick MacMillan’s 1840 bike has since been disproven, but even Webster’s Second Edition (unabridged) fell for this one, Scottish pride gone awry (like the discredited Leonardo DaVinci bicycle hoax for Italians). When cycling’s Golden Age hit in the 1890s, all countries wanted primacy to one of humankind’s greatest inventions, even far-off Russia, and the din hasn’t quite settled. In fact, now that bicycles are once again seen as an excellent solution, for our times (health and mobility), the primacy pedal will only be pumped harder. 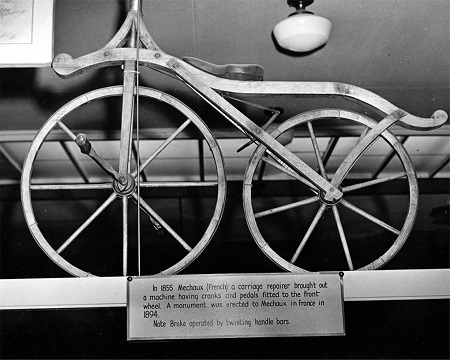 This 1855 Mechaux (sic) is likely another local-made bike, a fanciful and crude rendition hoping to look like an early Michaux. Frame and fork would’ve been iron, not wood.

Pierre and Ernest Michaux (father and son) of Paris (Bar-le-Duc originally) were first to commercialize pedal bicycles, making thousands of their velocipedes, starting in the mid-1860s (not 1855). Of course baron Karl von Drais from Karlsruhe was first to patent a steerable single-track two-wheeler. That was 1818, his “laufmaschine” (running machine). It was a hit among the dandies of Europe, until they got tired of wearing out their shoes. 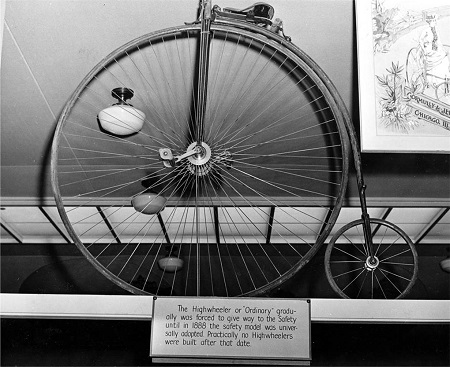 This highwheeler is from Coventry, an early-1880s Singer Special Challenge Club Roadster. Note its double-hollow fork, DHF being all the rage. The saddle has isolastic suspension to addend the excellent give in that long-spoke wire-tension wheel. 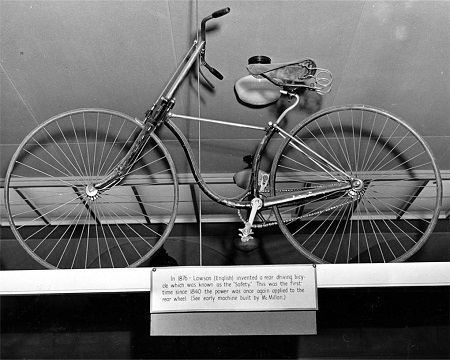 This hard-tire safety bike (with equal-size wheels) looks to be a c1889 Union Convertible. This is one of the first bicycles designed with women in mind, but to hedge their bets for this emerging market, the builders offered it in unisex, along with a spanner or two.

Lawson did come up with arguably the first rear-driven bicycle, though usually J. K. Starley gets the credit because his “Rover” bikes (same lineage as today’s Rover cars) popularized the concept. It was the bush-roller chain, (patented 1880 by Hans Renold) that made the safety bike possible. That’s still the chain design we use today, and still the most efficient way to transmit power. 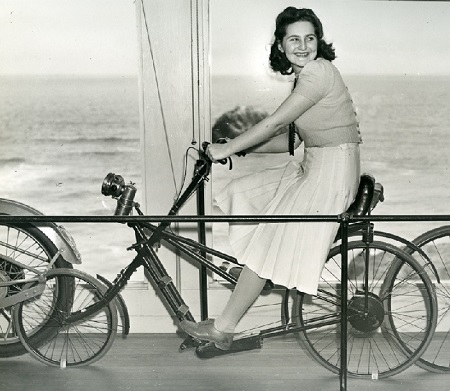 This is a 1930s German-made Stuttgart Machine (maker) “J-Rad” semi-recliner bike. Propulsion is by reciprocating pedaling (as opposed to the usual rotary pedaling). The rider pushes against the pedals, which pull cables around a spring-ratcheted spool on the rear hub. The pedal cranks are quite long, pivoting about 5 inches forward of the steering head. You can see, the rider can choose among three leverage ratios (and tempos). 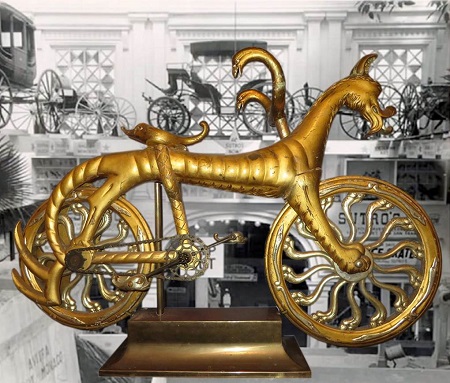 But at least one Whitney bike might have escaped. This 1890s Sea Horse bicycle is said to be one of 8 or 10 made for silver seeker Adolph Sutro in the 1890s. It is said that George Lucas has one of these bikes in his collection. The one shown here is said to have sold recently for $25,000.

Like San Francisco’s beloved “Playland at the Beach”, the Sutro Cliff House is no more. Relegated to the cherished and very special history of the City by the Bay– long gone but not forgotten.