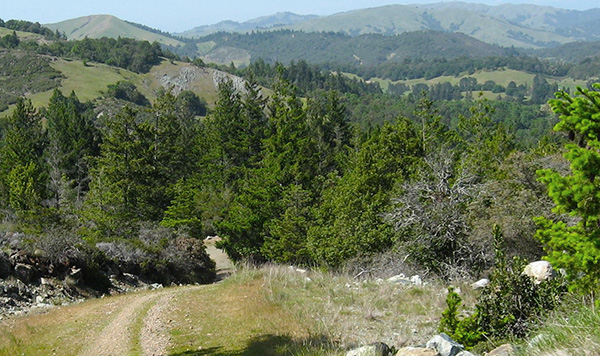 Fairfax, California sits at the foot of Mount Tamalpais, which is widely regarded as the birthplace of mountain biking. Fairfax is at the heart of one of the most popular bicycling regions in the United States. The town is the jumping-off point for road and mountain bike rides to all points of the compass. Mount Tamalpais, the West Marin hills, the Pacific Coast and the shore roads and trails of San Francisco Bay offer some of the best riding in the world. Thousands of bicycle tourists from around the world stream through Fairfax, as the town is on the official Pacific Coast bike route.

Fairfax, a Marin County town of 7500 people, is situated 20 miles northwest of San Francisco and is the gateway to Point Reyes National Seashore. Just north of Marin County is the world-renowned Napa-Sonoma wine region.

Marin County’s many valleys and gentle slopes have lured bicyclists from bay to Pacific since the 19th century. High-wheel bicyclists scaled the heights of Mt. Tamalpais by 1884, when the first road to the top, Eldridge Grade, was completed. For decades ferries and railroads brought bicyclists from San Francisco and around the Bay Area for weekend club forays into Marin. The beauty of Marin has long attracted outdoor-minded people, and naturally they and their offspring have taken to the outdoors and bicycling. National interest in personal and environmental health in the late 1950s and the 1960s laid the groundwork for today’s dramatic growth in bicycle use across America.

A seminal Marin County high school bike-racing league in the early 1970s introduced students to the bigger world of bicycling. Many participants became involved in the sport of cycling and in the bicycle business beyond their county. The mountain bike, the ubiquitous bicycle of today worldwide, the bike that put more Americans on bikes than at any time since the 1890s, has its roots in Marin.

In 1998 this same Marin bike trajectory led to the formation of the Marin County Bicycle Coalition (MCBC), a non-profit organization formed to promote safe bicycling for everyday transportation and recreation. In 2000, the MCBC, with the help of Marin County supervisors, was able to land Fairfax’s Manor Elementary School as one of three federal Safe Routes to School pilot programs in the nation. In 2005, the Safe Routes to School program went national.

Also in 2005, through the efforts of MCBC and Marin supervisors, Marin County was awarded $25 million as one of four “model” pilot communities in America, to build out a bicycle/pedestrian network. A reason Marin was chosen was its close proximity to tourist-mecca San Francisco. Many people visiting our City by the Bay from all over the world will also visit Marin and be inspired by our bicycling ways. Our bicycle/pedestrian infrastructure is taking shape, with more on the way. The Marin Museum of Bicycling will provide yet another reason for Americans to take Marin’s “seeing is believing” tour.

While some say that human-produced carbon emissions have reached a point of no return, the noble-yet-humble bicycle offers significant hope in reducing the devastating effects of air and water pollution and climate change.

We feel that the Marin Museum of Bicycling has something vitally important to offer our community and we hope you will too.