Welcome to the Hall of Fame!

Since 1988, we’ve been celebrating the people, places, bikes and races from the entire world of mountain biking. Founded in Crested Butte, Colorado, and since 2013 located at the Marin Museum of Bicycling in Fairfax, California!

We’ve been around since the beginning, bringing you the hero’s of the sport for over 30 years, and we still live, eat, breathe and ride mountain bikes— we were started by and are managed to this day by the pioneers of our sport.

Browse around and check out the photo and video galleries, look up INDUCTEES and NOMINEES and enjoy the history of this great sport.

The Hall of Fame Story

Carole Bauer-Romanik started the Mountain Bike Hall of Fame and Museum in the late 1980s.

It was originally located in the downstairs space of Donita’s Cantina. It was moved around town to several locations and actually went into storage in the mid-1990s. That’s when Don and Kay Peterson-Cook stepped in…

“Kay and I and Linda Hall decided that that couldn’t happen,” said Cook. “We dusted everything off and it went into the Crested Butte Heritage Museum, which was located in Botsie’s old house at Second and Sopris at the time.”

Cook continued, “We moved over with the museum when Tony’s Conoco was purchased for the museum site. We started working with Susan Medville on how to have a museum within the museum and it worked really well. From the bottom of our hearts, we couldn’t have kept it going without the Heritage Museum and its great staff and prime location.”

Cook said he and Kay have been volunteering hundreds of hours every year to keep the museum and Hall of Fame going. Now they want to take some of those hours and refocus them on their restaurant, Donita’s Cantina.

The Cooks were receptive to the idea of moving the Hall to Fairfax when they were approached by the group at Marin Museum of Bicycling. They felt it would improve the awareness of the sport throughout the world. “Kay and I have learned a lot. We’ve been putting the history online and it’s always, good or bad, had a Crested Butte slant,” he said. “Frankly, more than skiing, it has been mountain biking that helped put Crested Butte on the map. This move may expose the many segments of mountain biking and open it up even more. We simply don’t have the space here to honor all those other segments of our sport.

“Honestly, if it’s not going to be here, we’re glad it is moving to Fairfax,” Cook continued. “It deserves it. There is great riding and great history there. Moab was also considered, though Fairfax is just the right fit.”

It’s more of a global presence

Cook did say he felt the local support in Crested Butte had dwindled and the museum and Hall of Fame was being taken a bit for granted. “It’s really not on the locals’ radar as much as it once was. The Hall of Fame is recognized more nationally and internationally than locally,” he said. “There are a lot of reasons to make the move when a great opportunity like this has presented itself. It will always have its origins here. It started in Crested Butte and it’s a good thing Carole gathered all the stuff and the stories and the memories of those early days. It would be pretty selfish of us to say no to the request from the Fairfax guys and not let it go to the next level.” 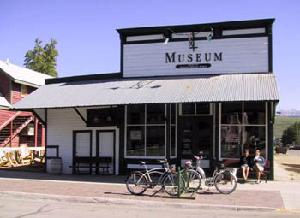 Crested Butte History Museum. One of the past homes of the Mountain Bike Hall of Fame.

Cook expressed great thanks to the Heritage Museum board and staff for allowing them a space in the facility. He also expressed gratitude to former Heritage Museum director Susan Medville for her help in putting together the space for the Hall of Fame. That gratitude extended to the current staff and board for supporting the Mountain Bike Hall of Fame. “The museum really wants to thank Don and Kay for working so hard to have it here,” Medville said. “We’ve been very fortunate.”

And with the annual Pearl Pass Tour to Aspen being the second oldest mountain biking event in the world, Kay and Don will keep history alive in Crested Butte by continuing the tradition that started all this Hall of Fame stuff in the first place.

Join or Renew your Hall of Fame Membership Today!

We have 2 ways you can join or renew your membership.  For those of you who are comfortable doing things like this online, choose number 1 below. For those of you who would rather have a piece of paper in your hand to fill out, choose number 2 below.  If both of these choices are still too confusing, just give us a call or drop us a line and we’ll be happy to help you- we want to make it as easy as possible to join!  Our contact info is on the Contact Us page.

A sad day for cycling, a legend amongst us has passed on. For 46 years Tony Tom and his "A Bicycle Odyssey" shop in Sausalito, California offered cycling fanatics the finest from around the world.

Join us on December 12th for a memorial ride around Paradise Drive in Tiburon. Meet at Dunphy Park across from A Bicycle Odyssey and be ready to leave at 10:00am. A celebration of Tony's life will follow afterwards back at the park. There's a new gofundme campaign to care for his mom Ruby and if you would like to contribute the link will appear after you sign up below.

Sign up for more info as it becomes available.